9. The Lord of the Rings 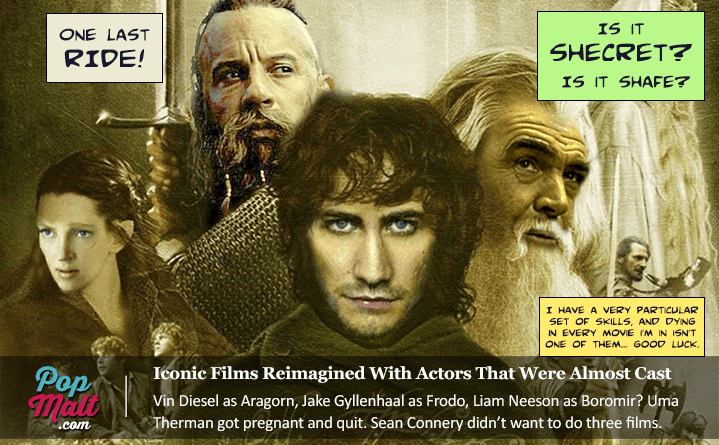 Another absolutely flawless cast nearly didn’t happen. With the exception of the prequels, J.R.R. Tolkien’s Lord of the Rings is one of the most flawless franchises ever to hit the big screen. Sway just a little, though, and the quest would have failed.

Gandalf: Sean Connery, known in part for his multiple failures to accept incredible roles in mega blockbusters, missed the boat again with this one. After being offered the role of Gandalf, he claimed spending 18 months shooting three movies didn’t appeal to him, and passed on the project. Considering the fact that Lord of the Rings: The Fellowship of the Ring was released in 2001, combined with the fact that Sir Connery didn’t appear in any films from 2001 to 2003, his problems with the 18 month time commitment apparently would have worked themselves out just fine. No big deal Sean. It was only one of the most successful franchises of all time. Ian McKellen, who got the role of Gandalf, was absolutely phenomenal in all six movies as the character.

He even continued his portrayal of the character beyond the big screen.

Aragorn: After powerhouse names like Russell Crowe and Daniel Day-Lewis turned down the role of Aragorn, it was given to Stuart Townsend, who actually trained with the cast and was shooting scenes before being removed by Peter Jackson, who felt Stuard was too young. With production under way and time being lost every day with nobody playing the famed ranger, the role was then offered to Viggo Mortensen with two hours to respond. Despite the fact that Viggo didn’t know much about the story, his son said it would be “awesome” if he played Aragorn, so he accepted the role based on that. Good call, Viggo. We would have likely never heard of you otherwise. Vin Diesel, fresh off the success of Saving Private Ryan, auditioned for the role as well, but was rejected.

Boromir: As epic as Sean Bean makes his roles, it’s a known fact that he tends to play characters who die. This made him the perfect choice for Boromir, but it also gave away Boromir’s impending death to anyone unfamiliar with the books (obligatory spoiler alert requirements expire after 10 years, sorry people). Liam Neeson was supposedly a strong candidate for Boromir as well. Having recently made the jump into action/adventure films as Jedi Master Qui Gon Jinn in Star Wars Episode 1: The Phantom Menace, he certainly was cut out for the genre. Pre-Taken, he could have pulled it off. Post-Taken? Not quite. It would have taken a lot more than three arrows to kill him, that’s for sure.

Clearly, Liam Neeson in Lord of the Rings would have been a little over the top.

Frodo: Jake Gyllenhaal reportedly auditioned for Frodo, but it’s unknown as to whether or not he was seriously considered. He went on to star in the cult hit Donnie Darko instead. The role ended up going to Elijah Wood.

Arwen: Peter Jackson had actually cast Kill Bill’s Uma Therman as Arwen, but she had to back out when she became pregnant. Milla Jovovich and Reese Witherspoon were also considered for the part of Arwen before it went to Liv Tyler.