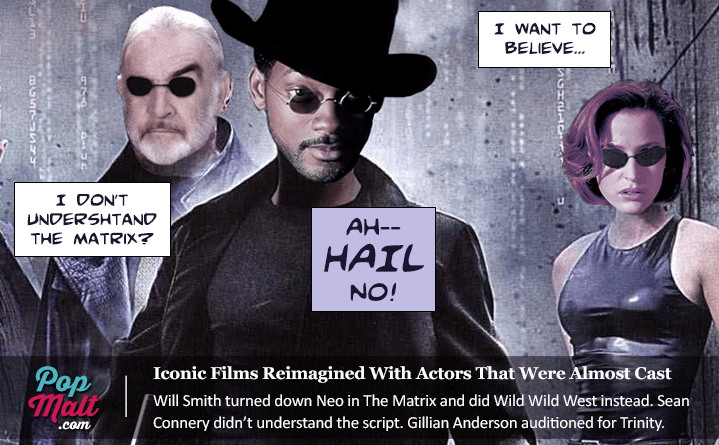 The Matrix had an amazing cast, but would it have been equally amazing with a few small glitches? You be the judge.

Neo: In what may go down as the worst wrong decision in Hollywood history, Will Smith turned down the lead role of Neo and instead lent his talents to Civil War hero James West in “Wild Wild West”. Sorry Big Will, but you should have taken the red pill. Even so, Will had this to say in an interview with Wired:

“You know, The Matrix is a difficult concept to pitch. In the pitch, I just didn’t see it. I watched Keanu’s performance – and very rarely do I say this – but I would have messed it up. I would have absolutely messed up The Matrix. At that point I wasn’t smart enough as an actor to let the movie be. Whereas Keanu was smart enough to just let it be. Let the movie and the director tell the story, and don’t try and perform every moment.”

In Will’s defense, The Matrix would have been very “Will Smith” had he been in it, especially if what he said is true about him not being able to play the role as written. Leonardo DiCaprio also turned down the role of Neo, concerned with the amount of special effects the movie would require at the time. Johnny Depp and Brad Pitt were also top choices for the lead. Brad Pitt did Fight Club instead, which doesn’t seem to be a decision he regrets.

Morpheus: Sean Connery was offered the role of Morpheus, but claimed the script was too confusing and passed. After fearing he was losing his ability to make good decisions when it came to accepting film roles, he later accepted the lead in League of Extraordinary Gentlemen (which he also didn’t understand). Sadly, this movie atomic bombed at the box office, and directly contributed to his eventual decision to retire from acting.

Trinity: Gillian Anderson, who famously portrayed Special Agent Dana Scully on the paranormal conspiracy TV series The X-Files, was considered for the role of Trinity. She would have done a great job, in our opinion, but Carrie-Anne Moss pulled it off all the same.