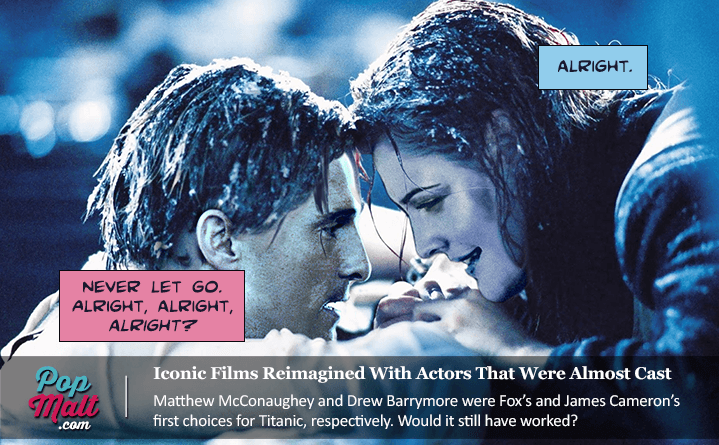 The number of people who were in line for the leads in the 1997 classic tale of the Titanic’s first and last voyage at sea definitely would fill more than a few lifeboats.

Rose Dewitt Bukater: James Cameron wanted Drew Barrymore for Rose. Drew Barrymore thought the role would hurt her career, and that she would be miscast because of it, and therefore passed. Others considered included Jennifer Aniston, Angelina Jolie, Jenifer Connelly, Winona Ryder, Charlize Theron, Maggie Gyllenhaal, and pretty much every other actress who was somebody in Hollywood at the time.

Jack Dawson: Macaulay Culkin, Christian Bale, Johnny Depp, Brad Pitt, were all being considered for the part of Jack, but Fox executives wanted Matthew McConaughey. As rumor has it, James Cameron went head to head with Fox, arguing adamantly against their first choice of “Mr. Alright, alright, alright”, insisting that Leonardo DiCaprio be brought on board instead. As fate would have it, he got his wish. Would the movie have been the same with Matthew McConaughey as Jack Dawson? Considering his love for taking off his own shirt in movies, perhaps the story would have been rewritten to allow him to be the one posing for the drawing? We’ll never know.

Cal Hockley: Rob Lowe reportedly pursued the role of Rose’s fiancé, Cal, before losing it to Billy Zane. Billy Zane, who was actually bald at the time of filming, auditioned with a toupee at the advice of a friend, and landed the role.

To get an idea what Titanic might have looked like without Leonardo DiCaprio at the helm, here’s an early draft scene from Titanic featuring Kate Winslet screen testing opposite Law & Order’s Jeremy Sisto.