7. Pirates of the Caribbean 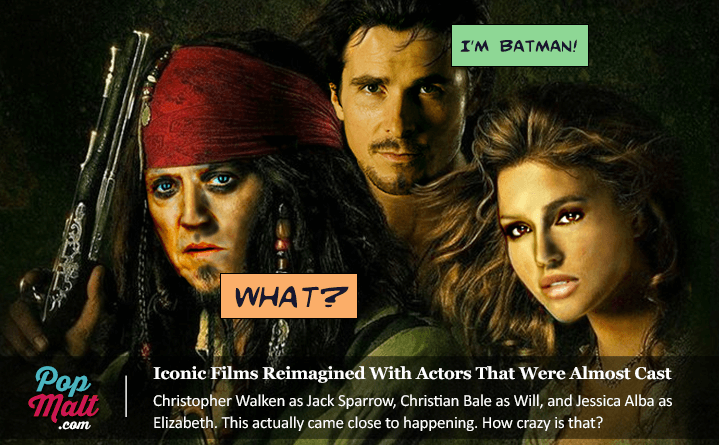 In what was a turning point in Disney’s history as a production company, Pirates of the Caribbean: The Curse of the Black Pearl was their first Pg-13 picture. Pirates of the Caribbean, loosely based on the theme park attraction of the same name, was a darker, yet fun film that blew away box office expectations. In hindsight, the cast was perfect, but it came close to veering off course quite a bit.

Jack Sparrow: Jack Sparrow, which is largely considered Johnny Depp’s most iconic role, could have ended up in the (very non-scissor) hands of Christopher Walken. As good as Depp’s performance was, to see Christopher Walken bumbling around wondering where the rum went also sounds appealing. It might have been a complete train wreck, but it would have been a sight to be seen nonetheless. Christopher Walken would have brought something different to the role, but it would have likely still worked in its own way. Known for playing stiffer, more serious characters, Walken’s screen presence doesn’t quite match what Johnny Depp brought to the role, but that doesn’t mean he couldn’t have reached deep down within his soul and found his inner Jack Sparrow. After all, he certainly found something he never knew he had in the following music video.

Jim Carrey was also considered for Jack Sparrow, a casting move that would have likely prevented the slump in his career that began in the mid 2000’s. “Alrighty then, but why is the rum gone?”

Elizabeth Swan: A few other actresses were considered for the lead role of Elizabeth, including Jessica Alba, Amanda Bynes, and Jaimie Alexander, before it was given to Keira Knightley.

Will Turner: Christian Bale, Jude Law, Tobey Maquire, and Ewan McGregor were among those turned down for the role of Will. Orlando Bloom, having recently soared to success as Legolas in The Lord of the Rings movies, got the part. Tobey Maquire’s Spidey sense may have been tingling, having just played Peter Parker in 2002’s Spider-Man, but that wasn’t enough to land him in the role of a good man AND a pirate.