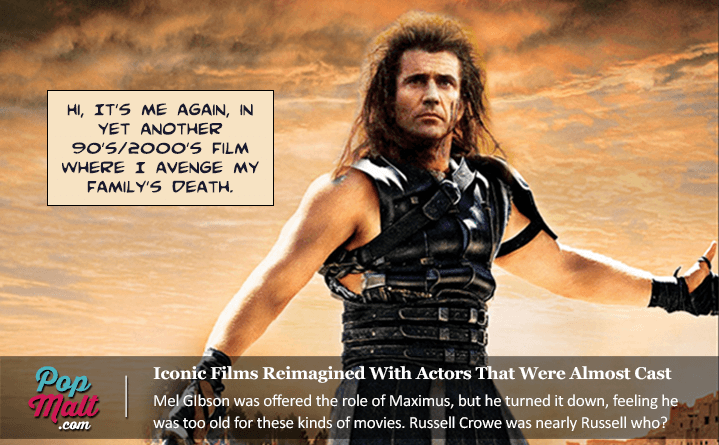 Brothers, what we do in life, echoes in eternity, and dying in your beds, many years from now, will you regret not playing both William Wallace and Maximus Aurelius Decimus? Thankfully, this is a regret that most of us can live without. For one person, however, the struggle is real.

Maximus: As the story goes, Mel Gibson was originally offered the role of Maximus in Gladiator, but turned it down, citing that he felt he was getting too old for these types of movies. Oddly enough, he starred in The Patriot the same year Gladiator was released, which, by most humble movie-goer’s opinions, would classify as one of “these” types of movies. Russell Crowe certainly benefited from Mel’s decision, as Gladiator made him a household name. Antonia Banderas was also considered for the role of Maximus at the time.

Commodus: Jude Law was considered for Jaoquin Phoenix’s breakout role of Commodus. Director Ridley Scott had always seen Phoenix in the role, however, and few can argue that his hunch was wrong. Phoenix’s brilliant portrayal of the tragic Emperor Commodus earned him a nomination for best actor in a supporting role.

Lucilla: Jennifer Lopez wanted the part, but was turned down. Surprisingly, her role in Anaconda didn’t open as many doors as she thought it would.