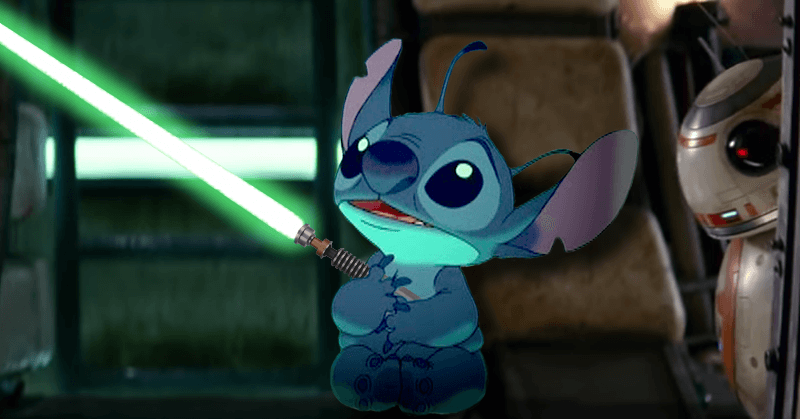 We should all take a moment to realize how huge the merging of Star Wars with Disney could really be. Now that the companies are one and the same, how long do you think it will before we, as the viewer audience, see a crossover between these two worlds? While we are not be brave to claim in a future Star Wars movie you will see Mickey Mouse yielding a lightsaber, once you think about some of Disney’s characters you realize how well some of them WOULD actually fit into the Star Wars world. You may laugh at the thoughts, but once I explain my ideas behind some of these crossovers I think they will make a great deal more sense to you and how you how organically they could actually work. Here are 12 Disney creations that could easily go on to play aliens in future Star Wars movies.

12. Stitch from Lilo and Stitch

Well, when we are talking about space movies and aliens, who else better to begin with than the Disney character who is ACTUALLY an alien? If you picture Stitch in your head, from his wacky dialogue to his cool, blue coloring, he would be right at home in that universe filled with exotic beasts, not wholly unlike him.

Plus, post Ewoks, Star Wars could use another cute alien. Stitch would fit that mold perfectly.

11. Any Creature From Monsters Inc.

The Pixar movie Monsters Inc. was loaded with colorful, alien looking beasties who would blend in on Tattooine like they were born there. Heck, even our two leads from the movie, Mike and Sully, would look right at home sitting among the galactic empire. Safe to say it is only a matter of time before these Easter Eggs start showing up in future Star Wars films.

Watch, mark my words. E.T has already appeared in one. Google it and see for yourself.

Come on, a trash compactor robot with a big heart. Wall-E is essentially the third best friend between C-3P0 and R2-D2. They just don’t know it yet.

But you can safely bet that Wall-E will show up at some point in some Star Wars movie. Even if he is just driving by in the background, scooping up some garbage and listening to classic 50’s show tunes, we would still smile.

If there is any place at all where a little, wise-talking, red dragon belongs outside of Disney, it is in a Star Wars movie. Imagine a little red dragon fluttering around and annoying everyone (especially Han Solo), but then they slowly figure out that this dragon does seem to know its stuff.

Suddenly, he is hovering over Han’s shoulder on all the missions, and Chewbacca is getting a might bit jealous. Wow, I even think we have a pretty solid plot for this one. May go write it right now. Be right back.

8. The Horned King from The Black Cauldron

Not sure if any of you noticed, but Disney makes some scary ass villains.  So far I have chosen good guys and sidekicks, but what about if Disney sent one of their bad guys into space with the Star Wars crew? Imagine the horned king, with some sick metal mask on to keep him breathing. Now imagine him recruiting for the dark side, and I think you see how awesome this choice would be.

Dude still scares me. Him and Darth would get along well, you can sense that.

Speaking of bad guys, I don’t think Disney has ever created something more visual menacing than the Chernobog from the Night on Bald Mountain section of the Fantasia film. You must remember? The big demon comes up from the mountain and all the little demons dance around him until the sun comes up, at which point he turns into a mountain. Literally, terrifying stuff.

Now I say we take it up a notch. How about the Chernobog IS a whole planet, and needs to be stopped. I know, may sound insane, but I promise you if you are a fan of either franchise, it would look mind-blowing on film.

6. Sebastian from The Little Mermaid

Just because the outer space we see in Star Wars is usually filled with full sized creatures, that does not mean there can’t be a few smaller, cuter creatures in outer space. Plus, as we have seen in the prequels, some of the planets have water and have life in their water.

Maybe Sebastian is like the new Yoda the jedi have to go to and learn. Plus, he is a Rastafarian, which makes him extra cool. I know that’s not very likely but let’s just go with it for the sake of the article.

First plus in his favor: he is played by Michael J. Fox. Second plus, he is a genius when it comes to figuring things out, and would be a great benefit to the team in times where brain was needed over brawn.

He is also quite handy with his knowledge of flying ships and Atlantis tech, which could further help the Star Wars program (he says as if it is a real thing.)

4. The Characters From The “Hero’s Duty” Scene in Wreck-It-Ralph

Come on, this is science fiction we are talking about here. The idea of a space marines may seem insane to us, but in outer space, that kinda stuff happens all the time in the Star Wars world. Some dude with a big gun in space armor. Bet you see that crap in outer space every day.

Toss them up in the background during some epic firefight while the Millennium Falcon is flying by and just watch the geeks drool. That would be very meta.

3. Every Single Character From Treasure Planet

In all honesty, they SHOULD do a full Treasure Planet/Star Wars crossover. Honestly, Treasure Planet was loaded with characters, all of whom would be right at home in one of the Star Wars many, varied planets. Treasure Planet has such a wonderful gallery of space bound rogues, to pick one would be impossible.

Watch the above trailer and see for yourself. Any one of those wonderful creations would be perfect in a Star Wars movie.

Again, already pulling from science fiction and outer space ideals quite a bit, Beymax from Big Hero 6 seems like he was created, ready for the stars. Though he started life as a healer-bot, he evolved and found purpose in helping people. Now imagine what it would be like to see Beymax jumping around and kicking butt with a bunch of Jedi.

You would have to heartless inside to not want to see that. Those two worlds were made for joining, and maybe if us fans pray it enough, we can make it happen.

1. All The Emotions From Inside Out

Inside Out is being hailed as one of Pixar’s most powerful films so far, and anyone who knows Pixar’s body of work knows just how lofty that statement is. But there is truth to it. Inside Out features emotions embodied by personalities. In other words, insecurity is a person, anger is a person, and so on.

But if you look at those emotions and how they are visually represented, it becomes quite clear that from skin tone to hair style, all four of those creations could easily be imagined inside the Cantina on Mos Eisley.

Just saying. The two worlds would mesh much smoother than most first assume. And don’t be surprised if you see a few of these down the road.