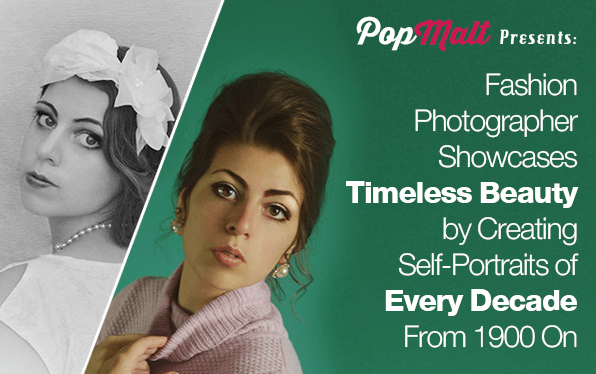 It’s not every day that you get the chance to time travel, but photographer Hope Fischer of Hope Renae Photography has done just that. When Hope and her boyfriend met, like many new couples, they found themselves asking each other some ice breaker questions. One question that they spent some time on was that of which decade they would live in if they had the choice. As a photographer and self-proclaimed fashion nerd, this question gave her a unique idea. She would take a stylized photo of herself in every decade from the 1900’s through today.

Through her love of history, fashion, photography, a smidge of time traveling creativity, she’s truly created something magical. Sit back and prepare yourself to learn a little, reflect a little, and be amazed a lot.

At the dawn of a new century, mankind as a whole was entering into a new era of civilization. During this decade, the first airplane flight would be achieved by the Wright Brothers, the first silent film (The Great Train Robbery) would be released, and Kellogg’s, a new American food company would create a product called Corn Flakes.

Hope had seen other photographers do decade inspired shoots before, but never where the vintage look and feel of the photo quality itself was properly reproduced. In her 1900’s photo, she managed to capture the popular sepia coloring technique. She also noted with interest that photography subjects in the early 20th century were often photographed without smiling. Smiling wouldn’t really take off in photos for another 30 or 40 years.

While the Industrial Revolution was still furthering the world through inventions and information at this time in history, the 1910’s decade was one tarnished with tragedy and war. The Titanic, mankind’s greatest naval accomplishment at the time, was sunk on its first voyage, just two years into the decade. The Oreo cookie was also invented this year. From 1914 to 1919, however, World War I weighed heavily on the world, leaving those who survived this decade with unimaginable heartache and suffering.

When asked which two iterations of herself from this decade project would likely get along the most in a time traveling scenario, Hope thought perhaps 1910’s Hope and 2010’s Hope could be good friends. The 1910’s were a time when manners mattered and crassness was discouraged, and as a traditional girl, she felt 2010’s Hope and 1910’s Hope would find common ground here. She did, however, note that 1910’s Hope looked a little condescending, something 2010’s Hope has little tolerance for. Maybe 1910’s Hope’s condescending look is more one of sadness and uncertainty due to all the trouble in the world at this time? Hang in there, 1910’s Hope. It gets better from there! P.S. Future Hope says “Nice headband!”

Before the 1920’s, the saying “The best thing since sliced bread” wouldn’t have made any sense. Many inventions after the 1920’s were great, but they were all merely the best thing since sliced bread. Sliced bread, invented in 1928, would begin to set the stage for processed food as we know it today. Other note-worthy innovations of the 1920’s included talkies (movies with audible speaking in them), bubble gum, commercial radio, and the discoveries of Insulin and Penicillin.

As an English education major, Hope found herself digging deep into modern classic novels from the 20th century. While she noted that several of these books could have left her with a pessimistic view of the past century, she found that this project was a great way for her to celebrate aspects of past decades that she loves, despite their dark sides. She told PopMalt, “There is no such thing as a perfect society, and we can always make change for the better. However, I think it’s important for us to remember that, in making changes, there is still value in learning from the past; not just from its failures, but also from its successes.”