6. Back to the Future 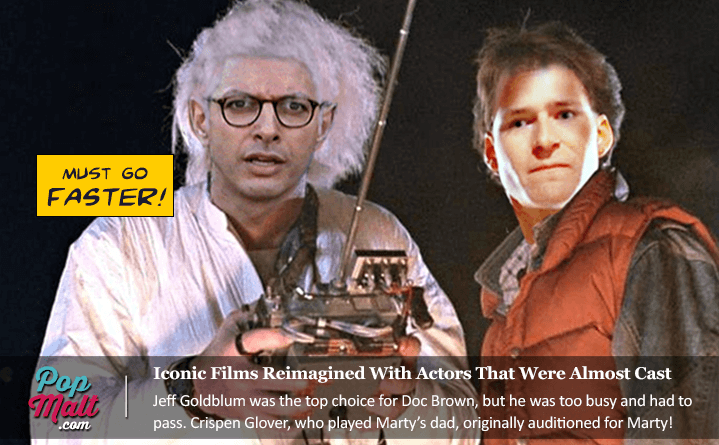 Back to the Future was an instant classic, but, just like in Back to the Future Part 2, where one small decision changes the future, Back to the Future nearly suffered the same fate. No, the studio wasn’t debating centering the film around tough guy Biff Tannen, but it nearly missed the perfect 88 miles per hour cast that we’ve grown to love and cherish.

Marty McFly: Most Back to the Future fans know that Eric Stoltz actually was cast as Marty McFly (and even filmed most of the movie as the character before being replaced at the last minute by Michael J. Fox), but did you know that Crispin Glover auditioned for the part as well? Before being cast as George McFly, Marty’s father, Crispin wanted to play the skateboarding, time-traveling, very non-chicken Marty McFly. Sorry Crispin, but you were the perfect George. Just for fun, here’s some clips of Eric Stoltz as Marty McFly.

Doc Brown: Christopher Lloyd was born to play Doc Brown, but Jeff Goldblum and John Lithgow were considered for the part as well. As amazing as Jeff and John are, everybody knows that Christopher Lloyd (and a flux capacitor) is what really makes time travel possible.

George McFly: As perfect as Crispin Glover was for the part of George, he wanted too much money to do the sequels and was replaced by Jeffrey Weissman with the help of prosthetic face pieces, talented makeup artists, and a very small role that either had him zipping around upside down or wearing sunglasses.

Biff Tannen: Titanic’s Billy Zane, who appears as one of Biff’s buddies in the first two Back to the Future films, originally auditioned for the role of Biff. Tom Wilson, proved to be the bigger butthead, however, and went down in cinema history as one of the greatest movie villains of all time.

Jennifer Parker: Claudia Wells played Jennifer in the first movie, but had to step out of the role in the sequels due to a family emergency. Her character went to unknown actress Elizabeth Sue, who bore somewhat of a resemblance to her, and was also largely minimized in the sequels.

FUN FACT: Due to the recasting of Jennifer between the first and second film, the entire last scene of the first movie was reshot, frame for frame for the intro sequence of the sequel. This clever trick caused the audience to believe the scene from the first movie was simply re-used. Due to this cinema sorcery, most people didn’t even realized Jennifer had been replaced. Check out the two scenes here:

Did you see what they did there?