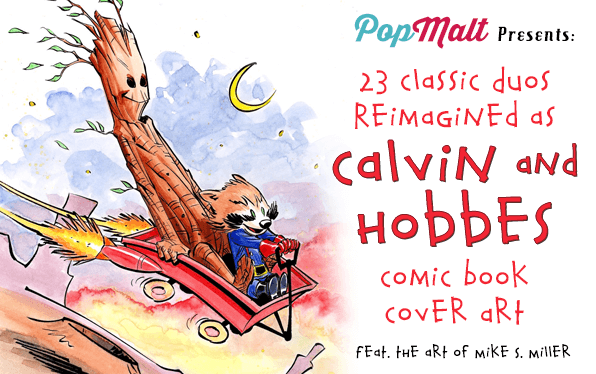 Have you ever wondered what Calvin and Hobbes would look like in alternate realities? Well, wonder no more, because today is your lucky day. Thanks to professional comic artist Mike S. Miller, Bill Watterson’s Calvin and Hobbes has transcended popular culture and media in his homage series of covers based on classic movie, TV, and comic duos.

As a huge fan of Calvin and Hobbes, he’s truly created something magical for the world to see in his Calvin and Hobbes homage series. We spoke to Mike about this series and got the inside scoop on why he did it, what his future plans are for more, and what else he’s working on. Here are his first 23 pieces, along with some interesting stories behind some of them. All of these pieces can be purchased as prints in his online store as well, so if you like what you see, a signed copy could be hanging on your wall in short notice.

23. Guardians of the Galaxy: Rocket and Groot

Mike’s first Calvin and Hobbes homage piece, titled simply “Rocket and Groot”, went viral last year after he posted it to his Facebook page. Mike said that certain scenes in the strip had been jumping out at him over the years as possible scenes he could use as a base for other popular duos. With the unique friendship of Rocket and Groot from Guardians of the Galaxy on his mind while reading Calvin and Hobbes one day, he pulled out his art supplies, topped the piece off with the classic Watterson watercolor polish, and his homage series was born. A year later, he’s created quite the collection.

In an interview with PopMalt, Mike said that, ever since starting this project, certain panels from Calvin and Hobbes jump out at him and practically shout out names of other duos that fit the poses in the strip. As he was reading the storyline where Calvin creates clones with his Transmogrifier, the scene where Calvin and Hobbes are left staring dumbfounded at the ashy remains of the machine reminded him of when Breaking Bad‘s Walt and Jesse spent an entire episode trying to kill the fly that got into their lab.

What do you do when you run out of gas in a post-apocalyptic world? Grab your favorite wagon and hit the road with your best bud and your imagination. Mike said that, from a character perspective, the Mad Max piece was his favorite. He said that the movie was the best he’s seen in the past decade, and that after paying to see the movie in the theaters four (yes, four) times, he knew he had to do a Calvin and Hobbes homage piece for it. Bill Watterson’s classic wagon in mid-flight scene made perfect sense for this one.