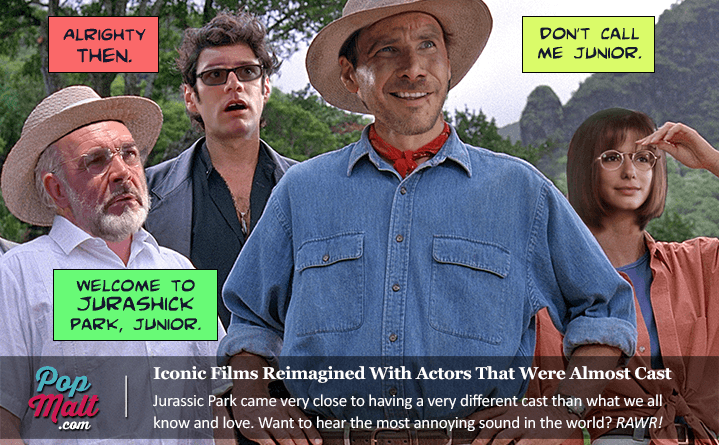 Just thinking about this one will give you raptors in the kitchen level chills. It’s hard to imagine anybody other than Richard Attenborough, Jeff Goldbum, Sam Niel, and Laura Dern taking us through our first tour of Jurassic Park, but this perfect cast came incredibly close to never happening.

Alan Grant: Fresh off the success of the Indiana Jones trilogy, Harrison Ford was the studio’s first choice for the role of dinosaur expert and paleontologist Alan Grant. He was even offered the role, but turned it down for unknown reasons. Perhaps he was sick of playing characters that wore fedoras? At any rate, this turned out to be a career launcher for “that guy from Jurassic Park”, also known as Sam Niell. In all seriousness though, what ever happened to him?

John Hammond: It’s hard to imagine our first impression of Jurassic Park without the lovable Richard Attenborough stumbling towards the camera, pre-historic ember-topped cane in hand, and quoting those four words that ushered us into a new era of movie making, “Welcome to Jurassic Park”. Nevertheless, that memorable phrase nearly came out of the mouth of Sir Sean Connery, who was originally offered the role of the eccentric billionaire behind the park. Connery turned down the role because it didn’t pay enough. Sorry, Sir Connery, but just because you play a billionaire on TV doesn’t mean you’re entitled to a pay raise. They needed money to make all those on-screen dinosaurs too, you know.

Richard Attenborough nearly didn’t take the part either, but only did so after Stephen Spielberg convinced him to come out of acting retirement. Attenborough had shifted to mostly directing by this point in his career (he hadn’t appeared on screen since 1979) and had just won awards for his picture Chaplin, which starred Robert Downey Jr. as the Hollywood Golden Age comic Charlie Chaplin.

Ellie Sattler: The role of Ellie Sattler nearly went to half a dozen others, including Sandra Bullock, Sigourney Weaver, Uma Therman, Julia Roberts, and Nicole Kidman, among others, but Laura Dern, Spielberg’s first choice, accepted the role.

Ian Malcolm: Perhaps the strangest near casting decision that would have changed the feel of Jurassic Park completely was Jim Carrey as Ian Malcolm, the “chaotician” who remained calm, cool, and semi-collected even when facing imminent danger. Somehow, the line “I’m fairly alarmed here” in Jim Carrey’s voice doesn’t quite have the same ring to it. Jim Carrey in Jurassic Park would have been a game changer, both for Jurassic Park and Carrey’s comedic career, which began to flourish the year after Jurassic Park was released with his roles in slapstick comedies Dumb and Dumber, The Mask, and Ace Venture: Pet Detective. Thankfully, despite the studios reports that Jim Carrey’s Ian Malcolm audition was incredible, Jeff Goldblum got the part. This role was practically made for him.

As bummed as we were that Jim Carrey’s Jurassic Park audition was nowhere to be found, we did find this little gem in which Jim Carrey himself actually appears briefly in an unused scene from the film. This should have definitely been played after the credits in the theater.

As Ian Malcolm would say (and coincidentally, Jim Carrey, had he been cast in the role), “You will remember to wash your hands before you eat anything!”