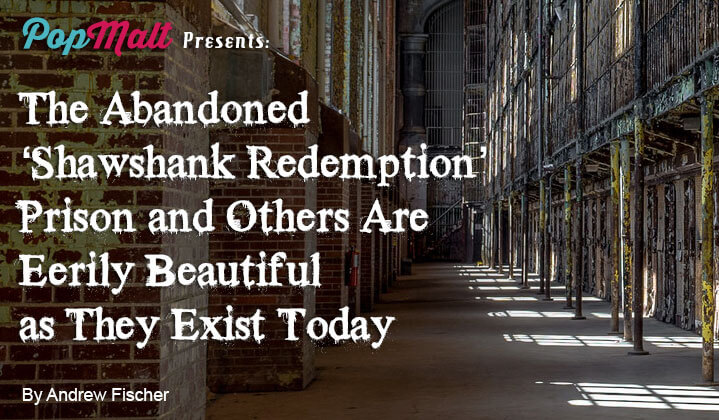 She’s fallen through floor boards, lost expensive equipment, and suffered personal injury, all in the name of photography. Thanks to her dedication, we are privileged to see some truly peculiar locations through her eyes – places we’d likely never find on our own. Her name is Cindy Vasko, and she’s an urban exploration photographer who specializes in finding the beauty in decrepit, abandoned sites around the world. Her unique photography of deserted locations includes islands, factories, hospitals, schools, castles, and other desolate places left to the brutal mercy of time. Due to the nature of her work, and her respect for the secrecy of these hidden places, she doesn’t typically talk about her projects. PopMalt sat down with her to discuss some of her more prominent subject matter – abandoned prisons. Yes, she’s even survived a stay in the infamous “Shawshank Redemption Prison”.

While many prisons of old have crumbled and decayed to the point of being torn down entirely, many of these stone fortresses still stand, forsaken and full of memories best forgotten. Here are five prisons Cindy has been granted access over the course of her career. Despite the fact that some of these remain open to visitors as tourist attractions, her perseverance has earned her exclusive passage to deeper, darker chasms and corridors within these prisons that are completely sealed off from the general public. Her work is haunting, breathtaking, and eerie at times, and you’ve likely never seen anything like it.

The Ohio State Reformatory (better known as the fictional Shawshank Prison) features an impressive blend between Victorian Gothic, Richardsonian Romanesque and Queen Anne architectural styles. With its magnificent exterior, complete with well-groomed lawns and flower gardens, one might expect to be entering a palace instead of the dark pit of endless cell blocks hidden deep within these majestic stone walls.

Upon Cindy’s arrival at the Ohio State Reformatory, a prison in which she would spend over seven hours photographing, she was confronted by her first challenge of the day; a wild goose, self-designated eternal guard of the vacant prison grounds, attempted to scare her off.

Also known as “Mansfield Reformatory” and “Shawshank Prison”, the prison made popular in the Academy Award nominated film “The Shawshank Redemption” was built over a period of nearly 25 years spanning the late 1800’s through early 1900’s. It remained fully operational until 1990, when it was closed after a federal court ruling, citing overcrowding and inhumane conditions for inmates.

Before the prison was erected, the location had originally been a training camp for Civil War soldiers. During its construction, prisoners from Columbus, Ohio were transported in via train to help complete the prison sewer system, which, of course, is featured in various scenes in “The Shawshank Redemption”. The 25 foot stone wall that encompasses the prison’s 15 acres was also built by prisoners.

After prisoners were moved to a new facility nearby in 1990, the prison was left to rot, with little to no maintenance and upkeep since then. In the early 90s, the prison was used for scenes in two movies, “The Shawshank Redemption”, which utilized the prison as Shawshank Prison throughout the entire film, and “Air Force One”, which portrayed the location as an unnamed Russian prison during a few scenes.

Depending on the time of day and area of the prison, Mansfield Reformatory boasts a stunning display of natural light. While touring the grounds, Cindy happened to catch this double beam of cross-like light leading up to the prison chapel. During its operation, this periodic phenomenon may have been an encouraging ray of hope for those confined within the bowels of this beast. The picture itself (below) was featured in a Fifth Avenue, New York City Gallery Exhibition.

The prison, which was on the verge of being torn down, has remained a popular tourist attraction and has been able to be saved due to fees charged for tours through the Mansfield Reformatory Preservation Society. During certain months of the year, people looking for a scare will pay to attend various overnight events on the grounds. Tourists of faith will appreciate the prison’s chapel, which allowed inmates on their own path to redemption a place to worship and pray together.

The prison was not without its own urban legends due to its checkered history. Multiple people, inmates and prison guards alike, were violently murdered by inmates at various points in the prison’s active years. Perhaps one of the most inhumane treatments of prisoners occurred in 1957 when 120 men were crammed into 20 solitary confinement cells for a month as punishment after a riot. These cells, referred to as “holes” in “The Shawshank Redemption”, were meant for one prisoner at a time. For those who are not quite mathematicians, that’s six people per one-man cell for 30 days. Needless to say, this would have been horrible.

The prison, which was shut down for inhumane conditions, had six levels of cell blocks stacked on top of one another. Snoring would be the least of your worries at the Ohio State Reformatory; one can only imagine the diseases and smells inmates would have to endure. As she stood in the massive halls of the prison, she tried to properly capture what she described as “cell blocks [that] seem to go on forever and soar up to the heavens.”

During her photography tour, Cindy described many of the rooms as “wet and messy”, something she actually enjoys and seeks out in these types of shoots. Needless to say, a stay at the Ohio State Reformatory was no picnic. It was specifically designed for hard criminals doing hard time for a long time.

It’s no wonder that the prison was chosen to accentuate the dire situations of the characters incarcerated in Shawshank Prison in “The Shawshank Redemption”. While Cindy tried to capture as much of the prison as she could, there were some areas that were simply too dark to properly photograph. These areas, closed to visitors, will most likely remain in utter darkness for the rest of history, sealed among the unwhispered secrets of Mansfield Reformatory.

NEXT PAGE: Check out the abandoned West Virginia State Penitentiary