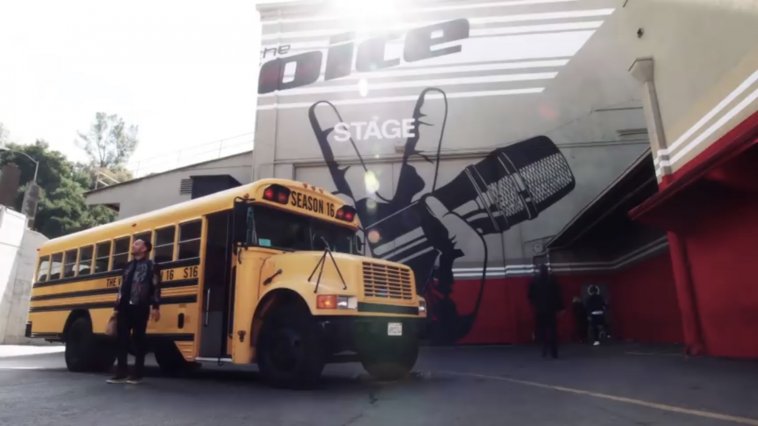 Okay, boys and girls, class is in session. And who better to be the new kid on campus than Mr. John Legend himself! That’s right. Yesterday was John’s first day of school as newest judge on The Voice. The hilarious season premiere intro featured Legend’s wife Chrissy Teigen wishing him on his way after making his sack lunch, and stocking his backpack with all the essential supplies—including a book of Country Sayings to understand Blake-Shelton-speak, and fake tattoos to impress bad boy Adam Levine.

If that wasn’t enough to get the party rollin’, it was the fresh batch of Blind Auditions. Guys, these new contestants were anything but ‘Ordinary People’, as their talent blew everyone out of the water.

How good were they? Let’s just put it this way. For the very first audition of the night, the judges were instantly hooked on contestant Gyth Rigdon’s voice; so much so that Legend was blocked. Yes! In the very first round of the show Legend was shut down! Really guys? Talk about initiation. No one fessed up though. We have a feeling it was Block—*ahem*—Blake Shelton. Can you blame him though? Rigdon killed that rendition of Dobie Gray’s “Drift Away”. And, with Legend being an EGOT winner and all, there’s a good chance Rigdon might’ve picked him otherwise. Sorry, John. Blake won this one.

By the way, if you’re wondering what “EGOT” means, that’s when someone wins an Emmy, Grammy, Oscar, and Tony Award. It’s such a prestigious honor that only 15 people have ever won all four—Legend was one of them. A track record like that serves as an understandable threat to the others. As Adam put it, “We are all scared of John.”

And, the class pranks didn’t stop, as Legend was blocked once again later in the show! This time by Kelly. At one point in the night he jokingly expressed his bewilderment for thinking he’d be welcomed to the show by people who he thought were his friends, to which Kelly playfully replied, “You were mistaken.” And, to her advantage, that block won her powerhouse Rizzi Myers, who did Ariana Grande justice. John played it cool, though, and just kept “breathin, and breathin, and breathin” as they kept “blockin and blockin and blockin”.

John should be happy though. His very first team member, 25-year-old Maelyn Jarmon sang a ballad version of Sting’s “Fields of Gold” that got her a four-chair turn. And, when she hit that high note at the end we were all like YASSS… Plus, she did all that while being permanently deaf in one ear. If that’s not amazing, we don’t know what is. John also played a part in redemption when he turned a chair for returning contestant Lisa Ramey, who previously had no chair turns in Season 15. Those weren’t the only inspiring moments of the night. We, again, saw how heartbreak could turn into triumph as Pop singer Jimmy Mowery passionately carried on his late father’s legacy with “Attention” by Charlie Puth. Truly a tearful moment to say the least. Jimmy, welcome to Team Adam.

The night also had some international sizzle to it as Team Kelly’s Karen Galera serenaded America in Spanish with Aventura’s “Mi Corazoncito”. Kelly literally turned her chair in the first two seconds of hearing Galera’s voice. No, really. We timed it—2.23 seconds to be exact. Other highlights included another four-chair turn for Gospel singer Matthew Johnson, a Left Eye-inspired rap done by R&B contestant Kim Cherry, and a cute ukulele-infused version of Gwen Stefani’s “Cool” done by 15-year-old Lily Joy. We know Blake was happy.

And, what about The Comeback Stage, you ask? Oh, it’s back full swing. And, guess who’s the coach? Grammy-Nominated Pop artist Bebe Rexha! Now, to all the contestants who want to win this season we say to you—if it’s meant to be, it’ll be.

With all the talent, tears, and of course laughter, it was a great way to kick off the new season. John ended the night by tweeting, “Not a bad way to start night one of @NBCTheVoice. I’d say I’m getting the hang of it, wouldn’t you agree @adamlevine @blakeshelton @kelly_clarkson?”

Not a bad way to start night one of @NBCTheVoice. I’d say I’m getting the hang of it, wouldn’t you agree @adamlevine @blakeshelton @kelly_clarkson? #VoicePremiere

Yes, John. We think they would. Especially, since there was even a special hashtag created in his honor. After Adam complimented his talent, as well as his good looks, #EGOTSMA (EGOT Sexiest Man Alive) was born. As far as PopMalt is concerned—#TeamJohn all the way!

Catch Part 2 of The Voice Season 16 Premiere tonight at 8/7c on NBC. Be sure to download The Voice app to build your team with your favorites artists, and use the hashtag #VoicePremiere and #EGOTSMA for all your Voice-related posts!