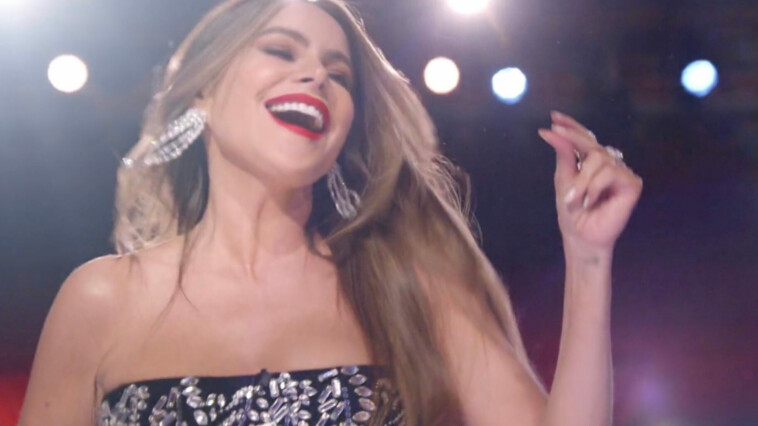 Last night saw the Season 15 premiere of ‘America’s Got Talent,’ and Emmy-winning actress Sofía Vergara made her debut as the series’ new judge. The fun and energetic personality finds herself alongside fellow judges Simon Cowell, Heidi Klum, Howie Mandel, and host Terry Crews.

The TV personalities made their entrance to much audience delight, and Sofía was no exception. After introducing her as the newest member of the AGT family, Crews asked Vergara how she was feeling, “I’m so nervous, but I am so excited! I’ve been watching this show for a long time, and I feel so lucky!” Simon praised her arrival as well, while giving the charge, “So, let’s hope we change someone’s life today.”

Sofía and the cast taped the episode 17 days before the stay-at-home order was placed on the city of Los Angeles. The premiere saw many amazing, jaw-dropping, and outright disturbing acts.

The night saw an array of talent, but the dance acts were by far the most impressive. An incredible routine was done by group BAD Salsa. The duo from Calcutta, India put their Eastern spin on the salsa genre with flips, tricks, and twirls throughout.

Millions of eyes were also wowed, when the multi-talented Malik Dope blew minds by performing a complicated drumline routine in perfect synchronization to a rap verse by Busta Rhymes. Later, he set the bar even higher by adding moonwalking, juggling, and cartwheeling to the mix, while drumming to J Balvin. Vergara especially enjoyed this moment, and gave her big smile of approval as she danced along to the Latin jam.

The night had its own share of tearjerkers too. The acoustic act from Chicago, IL known as Broken Roots consisted of two law enforcement members telling the judges their motivation for playing music, “In our job we see a lot of things that, quite frankly, we don’t want other people to see. And, our outlet became music.” After a powerful performance of “Wanted Dead Or Alive” one of the members, Joey, told of his family life, “I was previously married and I had two sons…she [my wife] passed away of cancer, and, I had recently met somebody years later. We now have a baby girl together. So, now I have three kids. Moving forward!”

Another emotional moment of the night featured Voices of Our City Choir–an ensemble from San Diego, CA shining bright with singers who had all experienced homelessness. Steph Johnson, the Executive Director of the program explained, “There were so many people living unsheltered in my neighborhood. I met musicians and singers, and I was like, ‘Wow! We could put together a group and sing together.’ There’s people who are in the choir…they can’t afford medicine, they can’t afford rent. So, we helped them out, and through the money that we’ve raised we’ve helped people get off the street.” The choir performed an original song entitled, “Sounds of the Sidewalk.”

The most memorable moment of the night told the story of singer Archie Williams, a man from Louisiana who had been incarcerated for 37 years after being wrongfully convicted of somebody else’s crime. Recent DNA tests freed him of his sentence after the Innocence Project reopened the case. News of his story instantly sobered the entire auditorium. “37 years…how did you get through?” asked host Terry Crews. “Freedom is of the mind. I went to prison but I never let my mind go to prison,” explained Williams. He went on to say how praying and singing gave him peace, performing “Don’t Let the Sun Go Down on Me” by Elton John. Watch the full story here:

With unforgettable testimonies of hope and courage, this season premiere of America’s Got Talent was one for the record books.

Watch ‘AGT’ Tuesdays at 8/7c on NBC, and follow Sofía on social media!