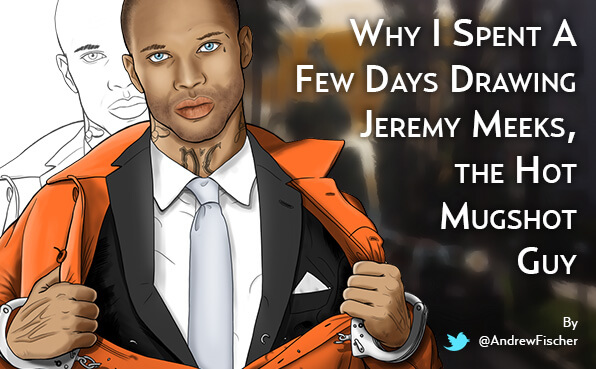 You may have seen the mug shot of Jeremy Meeks circulating around the Internet over the past week or so. If you’ve been living under a rock, or perhaps in a prison cell (Jeremy himself didn’t even realize he had become part of a story until he was contacted by his local news), you may not have heard of this. To sum it up briefly, Jeremy Meeks, a 30 year old Californian man, was arrested along with three other men on June 18th for various gang and weapons charges in Stockton California. His mugshot, in which he showcases his now-famous “pout”, went viral as the “hottest mugshot of all time”. As of the time of this writing, the photo has received over 100,000 likes on the Stockton Police Department’s Facebook page. To add to the peculiarity of this story, a Hollywood-based modeling agency has offered Mr. Meeks a modeling gig due to his new-found fame. He stands to make $30,000 a month according to various reports.

Meeks became an Internet sensation overnight. A simple Google search for his name results in several Photoshopped images of his head in top fashion ads and various Internet memes.

Jeremy Meeks doesn’t exactly have a squeaky clean past. In fact, he’s in jail for alleged crimes as I write this, but that doesn’t mean he’s guilty this time around. Are there countless others who might better deserve to be immortalized in art? Sure. Jeremy Meeks is not your typical inspiration for art, but as somebody who loves good stories with positive endings, I can see that he could very well be on track to create a better story for him and his family against all odds by making an honest buck. At the end of the day, that’s a good story.

For me, it’s a true underdog story in the making. It’s a rags to riches story. It’s a story about an outcast who just may become an international fashion model for top brands. It’s a story I haven’t heard before. But most of all, it’s a story of a man with a tough past who is getting a second chance to do life right. America has a long-held history of celebrating second chances. We see it in our movies, in our media, and in our every day lives. We like to see people redeemed. So, why then is it so hard for some of us to see the positive in the story of Jeremy Meeks? Some people say he shouldn’t be “rewarded for being a criminal”. I don’t see this as rewarding that. Sure, his mug shot is what put him in the public spotlight, but we don’t even know if he’s guilty of anything at this point. In recent interviews, his mother stated that, despite his checkered past, he had already turned his life around years ago and has been working hard to provide for his wife and small child. She said he was arrested on his way to work, and believes that he has been stereotyped due to tattoos he had gotten in the past.

I don’t believe “once a felon, always a felon”. I hope his mom is right, and that he has already turned his life around. If not, then I hope he uses this opportunity to begin turning a new leaf. As a person of faith, I don’t believe it’s ever too late for somebody to change the path they are on. I hold no opinions on whether or not I think he is guilty or not. That’s for the courts to decide. What I do know though, is that he has been given a really neat opportunity to make a better life for himself and his family starting right now. Instead of being quick to push him back down, why not celebrate that fact? I say good for him. He’s found a way to make an honest buck when he gets out of jail.

So, why did I spend a few days drawing Jeremy Meeks? I wanted to create a picture that contributed to the discussion in a unique way. This image isn’t necessarily meant to favor one stance over another. It’s simply meant to place the subject out there in the form of art. It’s a picture of Jeremy breaking out of handcuffs and his prison jumpsuit to reveal a suit underneath. For me, this represents the exciting second chance he’s been given. It is, however, ultimately up to you, the viewer, to decide what you’ll take away from it.

What do you think about the Jeremy Meeks story? Be sure to join the discussion by sharing your thoughts in the comments section below!