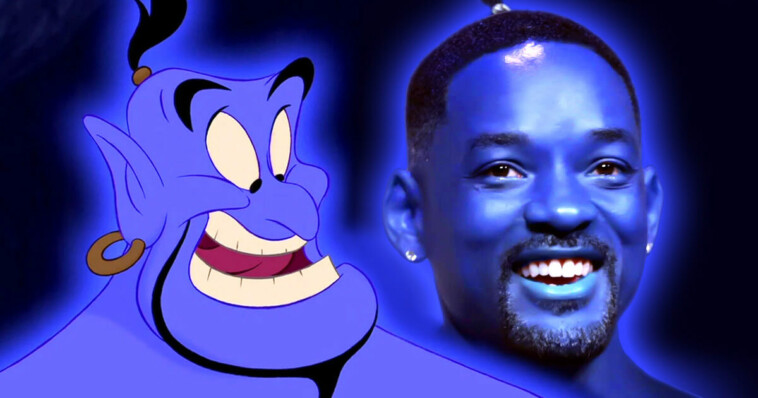 It’s true. Will Smith has accepted the role of the wish-granting, fun-loving, quick-witted friend of Aladdin in Disney’s live action installment of the 1992 classic. It’ll be interesting to see how the star will look in a pony tail, chin-strap beard and gold bracelets (no word on whether or not Shaq or Sinbad were available for the role). Egyptian-Canadian actor Mena Massoud, who will be playing Tarek Kassar in the new Amazon TV series Jack Ryan, will fill the role of Aladdin, while the role of Jasmine will be played by Power Rangers actress Naomi Scott—who is of English-Indian heritage. The future looks bright for the two fresh-faced actors cast to represent the fictional Middle Eastern city of Agrabah. The Guy Ritchie directed film has not been given a release date yet.

For some, this could be a bittersweet moment. Many adults who grew up with the beloved Disney Classic will, undoubtedly, look forward to viewing their favorite cartoon as a live action feature with real animals, real sand, and more. What may be hard to acknowledge, however, is the passing of the original Genie: The late Robin Williams. The big, blue puff of smoke had us dying with memorable quotes like, “Oi! Ten thousand years will give you such a crick in the neck!” And “Can we call you ‘Al’ or maybe just ‘Din’? Or how about ‘Laddie’?” Luckily, we have full faith in Will Smith to carry on the Genie legacy. The leading actor is as versatile as it gets! Let’s take a look into just how accomplished and adaptable the 48-year-old really is. After all, who better to freshen up Aladdin into Prince Ali than the memorable Fresh Prince himself.

Will Smith Can Do Television

In 1990, the Grammy Award-winning artist known as The Fresh Prince had already established himself in the music realm. The rapper-turned actor quickly demonstrated his multi-faceted nature when NBC’s “The Fresh Prince of Bel-Air” took off like a rocket. Monday night viewers everywhere fell in love with the weekly antics of Will Smith and his cousin Carlton (Alfonso Ribeiro), as the two rode the magic carpet of bougie life. And, as his success on the hit TV show developed, it eventually paved the way for success on the silver screen as well.

Will Smith Can Do Action Flicks

The Fresh Prince was here to stay and had us laughing all the way. With action-comedy classics like Bad Boys, Men in Black, and Independence Day Will Smith continually proved himself to be a man’s man to put it lightly. If someone ever wondered, “Will these films ever cater to all of my death defying, vehicle crushing, building-detonating viewing needs?” Uh, yeah. We’ll just leave it at that. Best part was, the comedic nature of his performances had us rooting for his protagonist characters even more. Decades from now, fans will still be greeting “foreigners” with the classic—“Welcome to Earth!”

Will Smith Can Do Thrillers

Everyone remembers being on the edge of their seat in 2007’s I Am Legend, as Smith aka Dr. Robert Neville obliterated multitudes of mutant zombies and had us walking out of the theater like, “Mama?!” The spine tingling suspense that resulted made it seem like Alfred Hitchcock himself was about to pop out.

Will Smith Can Do Drama

You have movies. And then you have Oscar and Golden Globe Nominees. With moving biographical pieces like Concussion, Pursuit of Happyness and Ali, we know why Will Smith has earned multiple Best Actor nominations in his lifetime. Who could forget that heart-wrenching scene of Smith’s character Chris Gardner and his son in the bathroom of that metro station? If they wanted waterworks, they got it. It’s almost as if all the influential people of society just pre-reserved Will Smith to tell their stories for them. He does it flawlessly. Now, to The Academy: Give that man the Oscar he deserves!

Will Smith Can Do Everything Else Too…

Smith even showed us his softer side with 2004’s Shark Tale. His voice-over efforts for the blue streak cleaner wrasse fish named Oscar showed us that the actor who played ‘Hancock’ can also make entertainment that’s fun for the whole family.

Well, there you have it, folks. He’s funny, he’s thought-provoking, and he’s even musical. And don’t worry, if we learned anything from Will Smith’s 2005 portrayal of Mr. Hitch in Hitch, it’s that he’s more than qualified to play the role of genie-turned-matchmaker. Aladdin’s gonna get the girl just fine. Remember, you might have friends, but “You ain’t never had a friend like Will!”