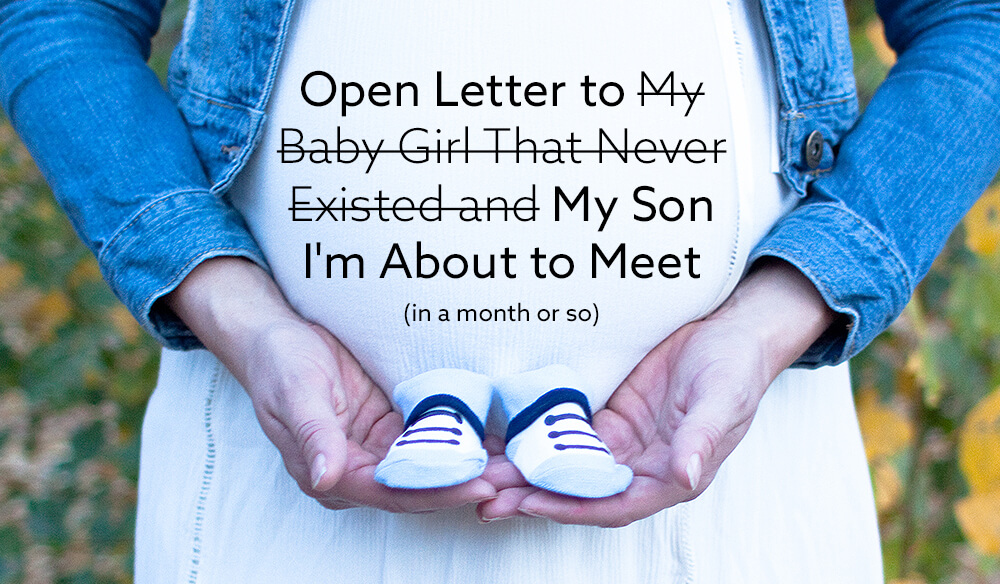 My wife and I are expecting our first child in the next month or so. Three days ago, after some complications flared up, we went in for an emergency, late-term growth ultrasound to make sure our baby was developing well. Everything was fine with the baby, but the ultrasound also revealed a game-changing twist that we hadn’t exactly planned for. I wrote the following letter to my unborn child after getting home that day.

To our surprise baby,

You first surprised us in April 2016 on our one year wedding anniversary, when your mother and I found out you would be joining our lives in a little less than a year. As the whole idea of being parents started to sink in, we began debating the pros and cons of finding out your gender. While getting one big surprise at your birth would have been fun, we also wanted to bring you home in gender-specific clothes to a room that was more or less set up for you. So we went in for an ultrasound and fell in love with you, our little girl. Your mother and grandmother held a very pink gender reveal party and everything. What a fun surprise! We named you, talked to you, prayed for you, and did all those things that first-time parents do as they start to imagine how their new family will look. Our children were going to have a sister as their oldest sibling! How exciting. Would our nieces dress you up as Anna or Elsa, or would our nephew manage to fit you into his Batman costume when nobody was looking? Would you like ballet dancing like your mother, or would you have two left feet like your father?

One thing was for sure, you’d be wearing plenty of pink.

Your mother and I both knew you would melt our hearts. Your mother had so much fun anticipating your arrival and talking about the little girl things she was looking forward to teaching you and experiencing with you. My thought process was different, however. I played the song “I danced with Cinderella” imagining dancing with you soon. I started to imagine the daddy daughter dates I’d take you on, but didn’t have to dwell on that for long before thinking about the boys that would someday pursue you. Oh my… I was definitely not looking forward to that surprise. I began experiencing an overwhelming sense of responsibility to protect you and look out for you as any father would feel for his daughter. I even thought about how I’d eventually one day walk you down the aisle at your wedding, assuming the old shotgun cleaning routine I had planned to pick up didn’t scare off all your suitors. I did, after all, have a lengthy list of qualifications for the boys who wanted to date my baby daughter. I’d planned to make it very clear that he would protect, respect, and honor you, or to quote the highly protective secret agent father Liam Neeson in the movie Taken, he’d face a very particular set of skills that I have picked up over the course of my lengthy career—alright I work at a desk, but still, you better believe there would have been unpleasant consequences in store for the boy that disrespected you in any way. And by the way, he wouldn’t have been allowed to date you until you were at least thirty years old or had become a black belt in no less than two major and one minor fighting and self-defense techniques.

You were our girl, our Christmas angel, our little snow princess. Your mother excitedly held a baby shower and our loving friends and family surprised us with more than enough pretty bows and dresses for you to wear. Your closet was full of the cutest, pinkest, prettiest girl clothes a baby shower, a bunch of gift cards, and some overtime can buy. Your room was adorned with pink curtains, and cute little lambs with pink bows. Your mother had literally just finished preparing your room for you. That’s when everything changed.

Little did we know, but another surprise was around the corner.

Your mother began having health issues at about seven and a half months into the pregnancy. There was even a chance you’d have to be born a month early. We tried to research options to prevent this scary preeclampsia thing we had just learned about, but after a few scares and faced with the knowledge that things weren’t getting better, we were advised to go in to get another ultrasound to make extra sure you were growing safely. The results of the tests did show reason for continued monitoring for your mother, but you were just fine That being said, you had quite the surprise of your own for us in that ultrasound room.

As it turns out, early, non-3D ultrasounds are not always 100% accurate in finding out genders, especially when you save some money by going to somebody with an older machine from the mid 90’s (it literally has a floppy disk drive on it). So here we are, a month or so away from your due date, and we just found out that you are a healthy baby boy.

Talk about an October surprise!

This, of course, is exciting and even somewhat comical. We had no preference one way or another of your gender, but this news was still surprisingly bittersweet. We have exactly one month to fall in love with the baby boy we never knew we had, and one month to say goodbye to the baby girl we now know never existed. This is a total game changer. The things we thought you might enjoy, all potentially different now. All those boys I was worried about wanting to date you? No longer my problem, right?

But then it hit me. All those other boys might not be my concern anymore, but someday you’ll be a concern to some loving father of some young woman out there. I have a set of standards for the man who would one day pursue my daughter, and those standards apply to you too. You may not be our little princess like we had thought, but that doesn’t mean you’ll automatically turn out to be Prince Charming either. Your mother and I are going to actually parent you, not the other way around. I’m going to teach you to hold doors for girls. I’m going to model for you how to talk about girls properly. I’m going to show you to look at girls as your sisters, not objects of lust. You don’t know it yet, but one day you’ll start to have crazy hormones. I’m going to raise you to have the God-fearing self-control of a man. I’ll teach you to protect, respect, and honor girls. That way, when one day you find the girl of your dreams, the girl you’d like to marry (a.k.a. my future daughter-in-law), you’ll be ready to treat her as I’d want my own daughter to be treated. Before you pick her up for dates, my words will echo in your mind. Her father may not be polishing his shotgun in front of you, but you’ll treat that girl with respect simply because it’s the right thing to do. I’ll teach you to start praying for her long before you ever even meet her. I’ll teach you to have self-discipline so you’ll be ready to wait for her and have proper boundaries. Before you kiss her and let her give you a piece of her heart, you’ll make sure her father approves of your goals for the relationship. If you want more than that, you’ll buy a ring, get her father’s blessing, propose to her, and then, assuming she says yes, you’d commit to be faithful to each other for the rest of your lives and get married.

But we’re getting a little ahead of ourselves once again, which is starting to become a reoccurring theme here. First things first, we need to thank God that you are growing normally and that you are healthy. While the news that you are actually a boy has caught us off guard, in a world where people are dealing with difficult medical surprises and even late term miscarriages or still births, we have everything to be thankful for. We’re still a little nervous about the potential preeclampsia, and we promise to do everything we can to make sure you are born safely.

Second, and you’ll appreciate this, we’re scrambling to replace all these pink clothes with boy clothes. It would have been easier if we hadn’t removed all the tags and washed them in anticipation of a possible early delivery, but luckily we’ve been able to make some trades and make some magic. We even managed to call in a favor and get your aunt and uncle to give us a last-minute maternity photo shoot so at least some of these pregnancy pictures will be about you, our baby boy. That whole idea of painting your room pink? Let’s just say you’re lucky we hadn’t had time to do that yet. Instead of Frozen and Cinderella, we’ll buy movies like The Incredibles. We’ll pack up all these dresses and bonnets in your closet in anticipation of someday giving you a sister, and do our best to find some baby suits, blazers, and top hats for you. We’ll replace your princess toys with dinosaurs and Legos, and replace those boots that were made for walkin’ with boots that were made for doing hard work. Our love for you is the same though, and nothing could ever replace that. We love you with all of our hearts. That should be no surprise.

We’ve got exactly one month to get used to the idea that you are about to come crashing into our lives instead of floating sweetly down from heaven like an angel. But don’t worry. We’ll be ready for you! These last three days have been a whirlwind of emotions, but we’re praying for you and we’re looking forward to meeting you. We’ll be your parents first, and your friends second. This may not always be fun, but you’ll definitely build solid character through the process. We’re going to raise you this way, because many years from now, we want your future father and mother in-law to be able to genuinely say that very same thing about you: “We’re praying for you and we are looking forward to meeting you.”

P.S. Sorry to the people who were unpleasantly surprised when you confidently bit into the blue cupcakes at our gender reveal party. As it turns out, we should have put the spicy mustard in the pink ones.