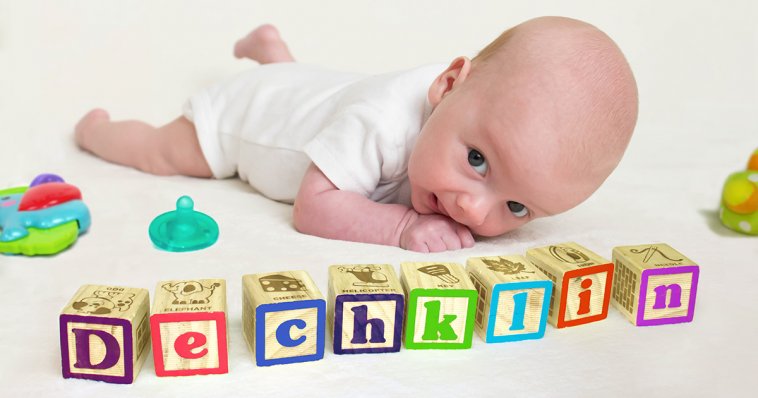 It’s the first day of first grade. The teacher pulls out a crisp, white sheet of paper listing all of the names of her new pupils. She begins reading from the list to a room full of eager little eyes, all focused intently on her, all ready to learn, excited for a year of possibilities.

Immediately, not one, not two, but three little hands shoot into the air.

The teacher, frowning, looks back down at her sheet of paper and clarifies. “Amber B?”

Two of the hands go down. The remaining little hand waves around in the air. A check mark is issued next to Amber B’s name. But for Amber D and Amber S, the damage has already been done. Their faces are red with embarrassment. The rest of the class, no doubt, is judging them silently. Clearly, the Ambers’ parents didn’t care enough to give their children a unique name. Clearly, they didn’t think this far into the future. And now, Amber B, Amber D, and Amber S are forced to be referred to by their last initials for the rest of the school year (and most likely every year after that).

One shy little hand inches its way into the air.

The Ambers look at Barrachuddis longingly. Oh, what it must be like to have a parent that loves you enough to give you such a unique name that no one will ever share it! What it must be like to have a name so special that one’s gender can never be assumed just from looking at the name! Amber D (or maybe Amber S, it really doesn’t matter) scribbles on a piece of paper, pretending that she isn’t mortified by what she’s experienced and dreading the moment when the teacher calls out her name and she’ll have to raise her hand a second time. The teacher is pleased, of course, with Barrachuddis and makes a mental note to write his or her parents a note, later on, thanking them for the opportunity – nay, the privilege – to teach such a lovely creature. She might even give Barrachuddis a shiny new sticker to put on his or her backpack.

Later, the Ambers, despondent, rejected, and sticker-less, sit at a cafeteria table with some Michaels, a few Aarons, and sixteen Jennifers while Barrachuddis sits at a similar, but much better, table with his or her new friend, Fierosha. The Ambers will do fine in school, but they will not stand out. Their grades will be average. They will not come home sporting new stickers on their backpacks. They will likely work several years in food service to pay for their bachelor degrees while Barrachuddis and Fierosha effortlessly build multi-million dollar corporations selling organic hand soaps and cruelty-free leggings before they have graduated from high school.

Does this scenario make you feel guilty? Sad? Well, it should. You may very well have destined your precious child to a lifetime of mediocrity simply by skimping in the naming department.  Unfortunately, for many children, it’s too late to go back and they will have to work much harder than their uniquely-named classmates in order to ever succeed in life. But if you are sitting there with a little bun floating around in your oven, waiting to be named, don’t fear. It is not too late for that little bun. We know what you’re saying to yourself: “How could I ever think of such a unique name all by myself? Surely I’m not that clever!” Surely you aren’t. Which is why we’ve written this article with the assistance of numerous naming experts, setting forth several fool-proof methods (that even you could understand!) to come up with a 100% one-of-a-kind name for your offspring. Now you, too, can give your child a name that will make them stand out from all those poor, unfortunate children with regular names. We’re looking at you, Susan.

For this first method, we were inspired, of course, by Gwyneth Paltrow’s iconically-named baby, Apple. This method is perfect for those parents who are looking for a unique name but don’t want to spend a long time spelling out that name to friends and family. The method is simple: find a fruit or vegetable in the produce department and just go with it. Celery? Great. Artichoke? Perfect. Avocado? Sounds good to us! What’s a Rutabaga? The name of your firstborn, that’s what it is!

Baby Name Expert Yoshanfalla-Dragonfruit Hines tells us “Giving your baby a name like Mango will make people think your baby is exotic, even if you live in the backwoods of Arkansas.” We couldn’t agree more. Yoshanfalla continues, “With this method, it’s important that parents realize they’re not limited to an actual produce department. I was inspired to name my fourth child Barbacoa after a particularly pleasant experience at Chipotle last year. And my daughter, Bimbo, was named when I was stuck in traffic behind a bread truck.”

The goal of the Produce Department method is to find name inspiration in your everyday life, in places you never thought to seek inspiration from. New mom Linda W. of Boulder, Colorado, tells us she named her child Hamper after being inspired on a Target run one Wednesday afternoon.

“This method is one of my best-kept secrets,” says Baby Name Consultant Portia Zofran-Florentis. “I used to watch those commercials for medications that came on during the Price is Right, and I would think to myself, “What a beautiful name that would be for a baby.” Portia, who went to school to become a veterinary assistant but now owns a lucrative business helping new parents name their babies, admits that most names she suggests to her clients actually come from various drug names. “I spend a lot of time in the pharmacy,” Portia states matter-of-factly.

Some of her most-often suggested drug-inspired names include Allegra, Ambien, and Restasis. “It’s strangely satisfying watching the child you helped name walk across a graduation stage. Last year I watched three Valtrexes and a Zyrtec graduate with honors. Unfortunately, I can’t say the same about anyone named Britney or Jason. They might have been there, but I probably fell asleep when their names were called.”

Kim lives in Colorado Springs with her husband and beautiful baby girl. She enjoys Netflix and seeing how many chunky-chipped chocolate chip cookies she can fit in her mouth at once.