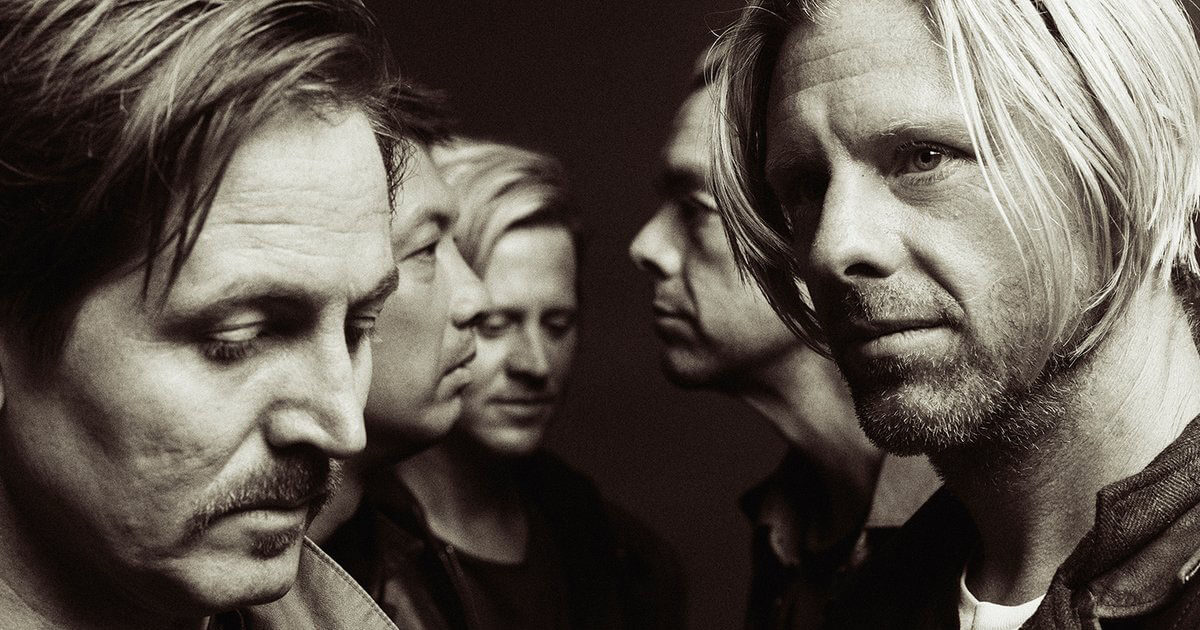 Switchfoot is back. January 18th marked the release of the GRAMMY award-winning band’s 11th studio album entitled, ‘Native Tongue.’ I got the chance to chat with band member, Drew Shirley to discuss their two-decade legacy.

Switchfoot’s latest album ‘Native Tongue’ brilliantly exploded onto the scene at the beginning of the year, much to fan delight. The title track of the same name features a thundering sound that’s sure to wake anyone out of their slumber. The pounding drums unapologetically cut through the mix like an ancient tribe of old. And, the raw and gritty vocals howl a battle cry that’s not to be ignored. Switchfoot is back—and better than ever.

The band returns after announcing in late 2017 that they would be going on hiatus. “For the first time in twenty years, we are taking an extended break,” their website read. Who could blame them? Most artists are grateful enough to be around for five years, maybe ten, if lucky. But, to have a career spanning well over two decades where new music is continuously being released? Unreal. Guitarist Drew Shirley provided an inside look into the band’s new album, their current tour, and their long legacy in Alternative Rock music.

“We are so excited about this record,” he tells us. “The thing that sets it apart is pretty interesting. We took a year off touring. That’s something we hadn’t done for 15 years.” He said of the year of rejuvenation the band went through, “We decided last year to take the entire year off and just, sort of, stop everything, and re-evaluate, and see if we still had songs. You know, you just wonder, do you still have it? You reach that point in your career where you’re like, ‘I don’t know. Do we still want to do this? Can we still do this?’” The answer is, yes they can.

You reach that point in your career where you’re like, ‘I don’t know. Do we still want to do this? Can we still do this?

Drew talks about how their hiatus helped them to eventually start writing again, “Slowly over the year we just started, kind of, going into the studio, and putting down ideas and songs…and Jon [Foreman] kept writing, and…our relationships got healthier, actually, having been off the road with our families. We had this, sort of renewed sense of vitality. It was just like, oh my gosh, these songs kind of chased us down on this record and, sort of begged to be released.” Through this process, ‘Native Tongue’ was born. The band released the title track from the album back in October, ending their hiatus—and on January 18th, their 11th studio album was here.

The blazing LP features 14 dynamic tracks that will have an anthem for everyone. It features a well-crafted collection of gems that stay true to the fans of old while proving relevancy for today. ‘Let It Happen’ owns the classic Alternative sound the band is known for, while ‘The Hardest Art’ features a collaboration with Kaela Sinclair from M83 and ventures into modern-day Synth-pop vibes. Fans of 60s Rock will appreciate the Beatles-inspired ‘Wonderful Feeling’ and ‘Dig New Streams,’ while fans of Indie Rock and Soul will appreciate the distant guitar swells, fat snares, and Gmaj7 chords of ‘Oxygen’—from the get-go, the song settles nicely into the pocket.

Drew explains the versatility of the album, “You know, these days it’s really interesting. The sound of a record is kind of like a playlist. I think it’s because we all listen to playlists, and we put songs on there that are our favorite tunes from all over the map. They’re just different sounding songs…I guess Switchfoot records have always kind of had a little bit for everyone through the years, but specifically this one; it’s so versatile.”

The band reached out to their friends at OneRepublic for help with production. The song ‘Voices’ is co-written by distinguished frontman Ryan Tedder, who is known for being one of the most prolific songwriters in the music industry. There’s even the heartfelt ‘Prodigal Soul’ which is reminiscent of a track on ‘The Beautiful Letdown.’ The song shares a nostalgic quality of ‘This Is Your Life,’ as it peers into the life of someone coming to their breaking point and wanting to come home.

Last month kicked off Switchfoot’s ‘Native Tongue Tour’ with special guests Colony House and Tyson Motsenbocker. The North American leg will run through April 13th, when the band will conclude in Vancouver, BC. Drew talks about how he and the guys have been able to pass the torch to the younger tour openers, “We have a great relationship with them…It’s cool pouring into them, because, you know, we talk a lot about guitars, and amps, and how to make different sounds, and how to make the tour work. But, you know what’s cool about them? Some of them have young families, and they’re like, ‘Man, how do you have a marriage and tour in a band? How does that work? How do you guys do it?’ And, that’s the real stuff…Your family is more important than anything. If you don’t have that, nothing in your job is gonna be worth it.” He went on to say, “It takes sacrifice. And work. And time. And, saying no to things…to say ‘yes’ to your relationships.”

Your family is more important than anything. If you don’t have that, nothing in your job is gonna be worth it. It takes sacrifice. And work. And time. And, saying no to things…to say ‘yes’ to your relationships.

Drew continues, “We’re rootin’ for them, and building into them…Like, ‘Dude, I want you guys to freakin’ succeed, and go far beyond us.’ You know, I love building into other bands, and I want to see them outrun us and outlast us…We’re still thankful that we can provide a stage [for them], and in a way help them very practically like, ‘Okay! Steal all of our fans! Get up here, and play, and open for us. Let’s share fans!’ We love those guys. We believe in what they’re doing, and who they are as people.”

Speaking of sharing fans, Switchfoot has some heroes as well—this is huge. This summer, the crew will be playing stadiums across Europe with none other than Bon Jovi. That’s right, in July the band will be openers themselves on the ‘Bon Jovi: This House Is Not For Sale Tour.’ While they’re over there, they’ll also be headlining some shows of their own.

Having an opportunity to be a part of a spectacle as big as a Bon Jovi concert is amazing. Yet, the guys still remain humble about what they do. They also care about continuing to make a positive impact in the culture around them. Drew explains the meaning behind the name ‘Native Tongue’ in the current climate of 2019, “We read the news, same as everybody, and you just see hate, and dissonance, and people voicing their opinions…everybody just throwing mud in the news, and on Twitter, and Instagram, and…comments are always witty, but kind of snarky, and sort of hurtful. It’s like, man…people just vent their aggression online.”

He then went on to talk about how the band wanted to help make a change, “We started looking at it, and it’s like, you know what? That isn’t how we first learned to relate to each other.” He refers to how humans relate to the world in their infancy, “So, our lead singer Jon had a baby boy last year. And, you know, he’s looking at his son, and he’s going, ‘This little baby needs love, and it knows nothing about how to get it. It just wants to be near me, and love me—and I’m going to love it.’ And, that’s your first instinct. You want to love this other human.” He explained that as we grow up, however, that love eventually gets twisted. The album is an appeal to return to our roots, “‘Native Tongue’ is a call for us to remember that love was our first language, and we need to actually try to get back to that as people.”

‘Native Tongue’ is a call for us to remember that love was our first language, and we need to actually try to get back to that as people.

This charge to humanity is a reflection of how the band has always gone about writing their songs. If there’s one thing that we know, the gang has regularly asked the tough questions about life in their songs—the kind of countercultural questions that have us examining our own lives, asking the why behind what we do. Drew gave some insight into the band’s long history, “It’s crazy, man! I never knew it would last this long. You know, when you start a band you don’t know if people will support you that long, and frankly, you don’t know if you have it in you to last that long…and, every year it was like, ‘Wow! We’re doing another record! We got signed to another deal, and people are still buying it!’ Like, our fans? Some of them have been with us since that first record in 1997…back in the 1900s,” he jokes. “It makes me very thankful because I see how rare it is. Even great bands usually don’t last 20 years…We work hard. In the off-season we’re still training, you know? We’ll take a year off, but we’re still working on things, and coming up with ideas, and serving our fans, and taking care of them.” He points out the genuine quality that people want, “I think your fans notice when you actually care about what you’re doing. They’ve just come along with you for the journey…And, we’ve had something to say. You know, I think that’s another thing. We don’t put out a song unless we believe it.”

After making music for so long, it’d be easy for a band to continue writing songs just for the sake of money, power, or only because it was expected of them. Not so with Switchfoot. The San Diego natives have always lived out the songs they write, “If you’re not moved yourself; if your emotions aren’t engaged, and if you’re not putting your heart out there in a fresh way somehow, then people can tell. That’s something that I think we’ve been blessed [with]—to have that heart. It just hasn’t run out. We’ve always had something to say for 20 years.”

If you’re not moved yourself; if your emotions aren’t engaged, and if you’re not putting your heart out there in a fresh way somehow, then people can tell.

‘Native Tongue’ is now available everywhere. For tickets to the ‘Native Tongue Tour’ and the ‘Bon Jovi: This House Is Not For Sale Tour’ visit switchfoot.com.