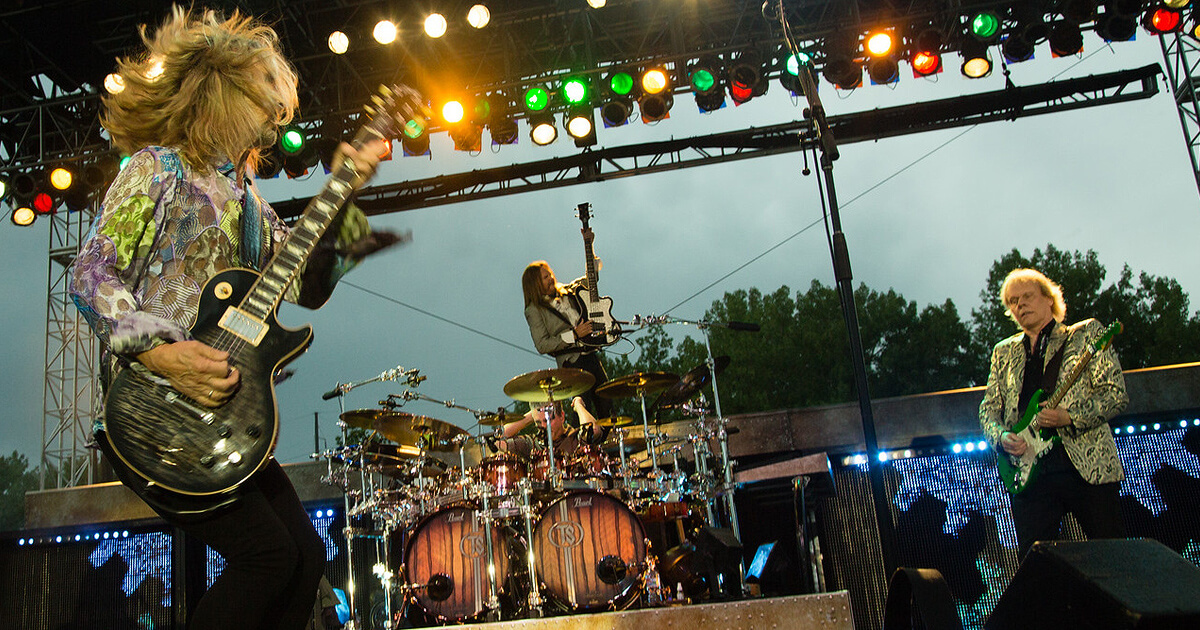 This weekend, legendary rock band Styx came together once again to jam out for their 2019 North American tour. Long-time fans of the group got to enjoy a night with the group on the Hudson Gardens lawn. The band played for nearly two hours all their greatest hits including, ‘Come Sail Away,’ ‘The Best of Times,’ ‘Too Much Time on My Hands,’ ‘Mr. Roboto,’ and ‘Renegade.’

Tommy Shaw sounded better than ever with vocals that gracefully carried throughout the open space. You can’t fake this talent even if you wanted to. Shaw represents an era of music where you had to be great in order to get a record deal—they weren’t just given out like candy. Singing and playing are his crafts, and he stewards them well. He knows who he is artistically, as this is just what he does. This can be said about every other band member as well.

Lawrence Gowan’s presence on stage was definitely a highlight of the night. It’s always great to see contemporary musicians who are classically trained. Gowan was no exception. His keyboard playing abilities were incredible. He kept the set fresh by having his 360-degree rotating keyboard, which allowed the crowd to see him from multiple vantage points. Then, he included spectacles like playing the ivories with his hands behind his back. He also delivered a jaw-dropping classical arrangement—proving (not saying he needed to) that he’s got the goods.

James Young went down memory lane as he reminisced on the band’s achievements present and past. The band’s first four albums all sold more than 3 million copies. Young joked that some fans there might even still have the 8-track tape that it was originally recorded on. As the band keeps doing what they do, achievements are still seen to this day. Young mentioned drummer Todd Sucherman’s recent success. Sucherman was recently crowned by Modern Drummer Magazine as the “#1 Progressive Rock Drummer.” This fate was clearly seen as Sucherman effortlessly played all the hits, some with very complicated time signatures.

Visual effects weren’t overkill, but they definitely added to the show. For ‘Too Much Time on My Hands,’ a timeline of years were shown. For ‘Mr. Roboto,’ colorful Japanese writing was plastered on screen. The light show made sense. It wasn’t too much where it overshadowed the band’s presence. It was just enough to accentuate the band’s music. The set was still about the music primarily, and we like that. Side note, we got a little worried when the band left the stage and hadn’t played ‘Mr. Roboto’ or ‘Renegade.’ We’re thinking, “Those were big hits though. Are they really done?” Not to worry, the band soon came out for an encore and played the beloved hits that brought the fans skyrocketing to their feet once again. It was the best of times!

The music of Styx has been passed down to more than two generations, with ages ranging from Baby Boomers all the way down to Millennials. The band’s energy was just a bright as ever. It was awesome to see band members in their mid-60s still having fun like back in 1975. The crowd would regularly find the band climbing on top of high platforms without missing a note. Being a rock star is in the blood, and they aren’t even close to being done.

This wasn’t just a night to play the hits of yesteryear, though. The band played music from their most recent album ‘The Mission’, which was released in 2017. Songs like ‘Radio Silence’ reign true to the band’s original sound while still proving relevancy for today. The harmonies are tighter than ever, and the groove of the album goes to show that pure rock music is not dead.


To see a rock band so monumental was truly an experience. I studied, more than anything, at the outstanding skill that can only be acquired by hard work over time. I represent the new generation that is continuing to discover just how great this band was and continues to be.