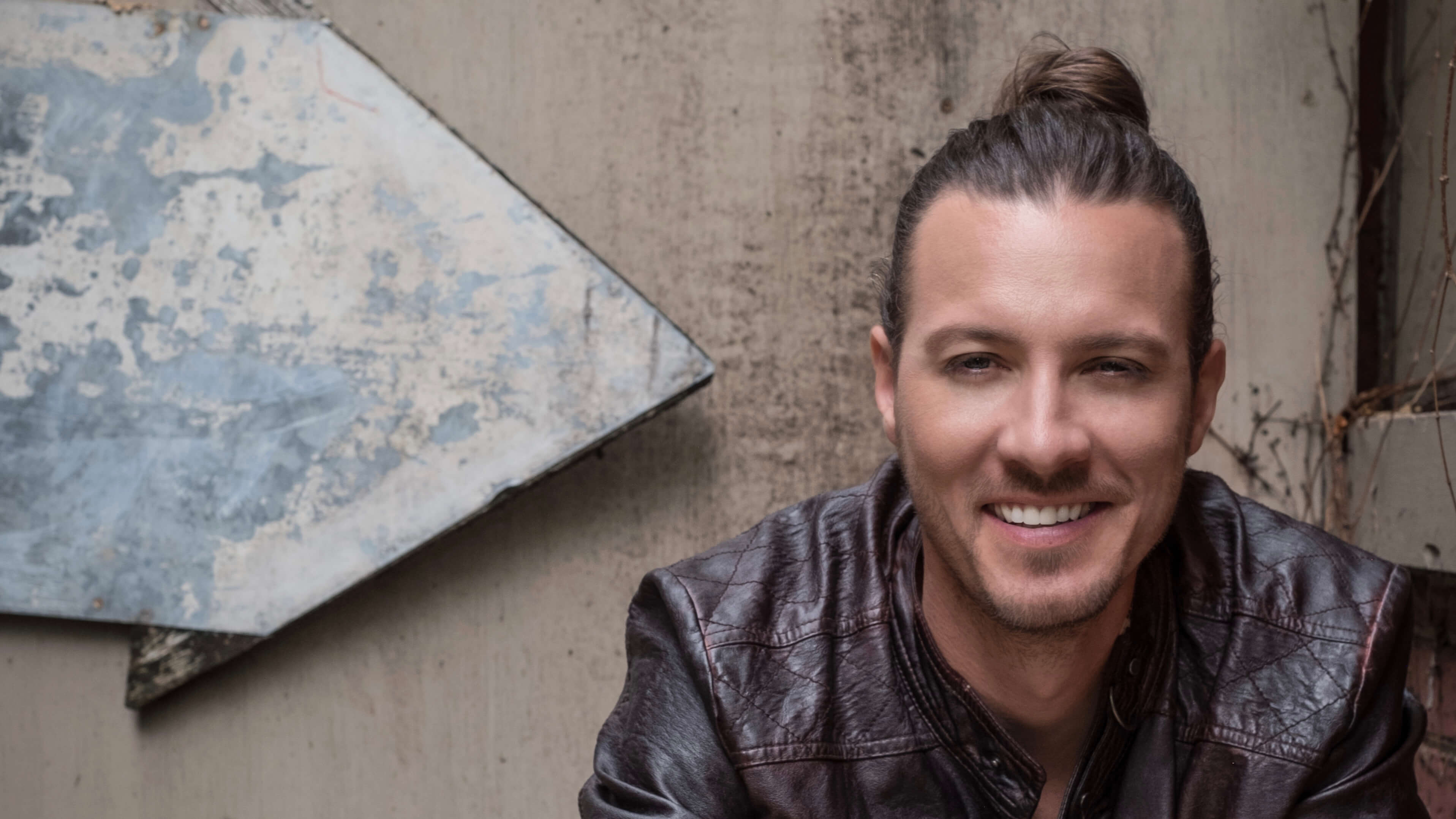 This month, I found myself enjoying summertime to the fullest on the sandy beaches of Pensacola, Florida—salt water in the air, seagulls calling, and all the sun you could ask for. One particular day, while on the bayside, I enjoyed a phone call with country music artist Rayne Johnson.

Rayne, who’s name is becoming more known every day, is rising on social media, has a debut EP on its way, and is already lined up to play shows with household names like Jason Aldean and Brad Paisley. While conversing with him, we discussed his background in music and how he reached his current stage of success.

PopMalt: “So, okay Rayne, tell me how this country career started. Did you do music from a young age, or did you just fall into this recently? How’d that happen?

Rayne: “I started singing in church, you know, growing up doing that kind of thing. I kind of went into a band after that, and played in a couple bands just trying to find my niche.”

The 32-year-old, who grew in up in Fairfield, Ohio has deep roots in music, and has been around it since a very young age. He recalls one of the first times he ever did music, “Haha, I think my mom had me sing with her on Mother’s Day when I was like 5 or something like that? You know, ‘cause my mom sang in church her whole life, doing that kind of thing—You know, on the praise team and that sort of stuff. So, it was always around me. My mom’s a great singer, and a lot of people in our area know her as this powerful voice at church. And, then my dad, he was a great singer too. He just never really sang in choir. I remember being young driving in the car, and my mom’s singing, and my dad would sing too. And, I would be like, ‘I didn’t know that you were a good singer!” And, my mom would laugh always about that, ‘cause she’d be like, ‘Yeah, he’s always been a good singer, he just really never sings!’ Haha.”

PopMalt: “Wow, so you came from a pretty musical family.”

Rayne: “Yeah, ‘musical’ as in vocal-wise. Neither one of my parents played instruments or anything like that. I just got interested in guitar—not even really at a super young age. I think that I was probably in my early 20s, and I met this guy. He was an older gentleman, and I actually worked with him. He played an old Celebrity Ovation, and I knew nothing about guitars. I just kind of sparked an interest and was asking him a lot about it. He was like, ‘Well, if you get you a guitar, I’ll show you what I know.’ And, I went and bought pretty much the identical guitar that he had [laughing], just in a different color.

The older gentleman was good to his word, “Sure enough man, he sat down with me and just started showing me old chords and old strumming patterns and stuff. And, around that time I was kind of into classic country a lot. I listened to a lot of Merle Haggard and Johnny Cash and stuff. And their songs are super easy to play, because they’re just like the basic chords, and there’s not a lot of picking, and hard strum patterns and stuff. So, that’s kind of what I learned. And, still to this day, I’m not like some super great guitar player. I can play rhythm pretty [decently]. But, that was what I kind of cut my teeth on, doing that. I remember printing out sheets of chorded music, just with the words with the ‘G,’ ‘C,’ ‘D’ over top of them, haha, and just kind of figuring it out as I went.”

After being a part of various bands in various genres, Rayne was eventually part of a band that played what he enjoyed the most, country. This led to him being approached to sing demos for other artists. Though he had no experience recording demos in the past, he decided to try it out when the opportunity presented itself.

“I just got a phone call from the guy that manages me now, and he was like, ‘Hey, we have some country songs,’ —and, we didn’t know each other from Adam. I mean, we didn’t know each other at all. He’s like, ‘Would you want to come in and get paid to sing these songs?’ And, I’m like, ‘Yeah, sure! I’ll give it a shot.’ And, I told him right from the get-go, I’m like, ‘Hey man, I’m not a studio guy. I’ve never really—I’ve done stuff with my bands before, but I’m not like a professional studio guy.’

Rayne tells of how his now manager decided to try things out anyway, “He’s like, ‘Well, let’s give it a shot!’ And, within like my—I think it was my second or third session he’s like, ‘Man, have you ever thought about pursuing a musical career?’ And I’m like, ‘Well, you know, I’ve always had that dream and always been chasing after it. I just, you know, it just hasn’t happened, you know?’ And he’s like, ‘Well, what do you think about me managing you?’

Johnson took a minute to think the process over for a little while, “I thought about it for a long time—when I say ‘a long time’ I probably took about a month or so to think about it, and talked to my wife about it, and was like, ‘Hey, should I jump into this, and see what happens?’ Man, I tell you what. The group of people that he has around him, and that he brought around me—they’re just top notch folks and just workaholics…I’ve been doing this for a long time, and they have just worked their butts off and believed in me, which is the best part about it. I’ve never worked with somebody who believed in someone else so much, you know what I mean?”

PopMalt: “Wow. So, this whole process, how many years has this been for you—like, from the time that he said, ‘Hey, let’s do this thing.’”

Rayne: “…It’s not been quite two years yet. I know it’s over a year. This little stint right here, man has been somewhat short…It’s just one of those things where—to me I kind of look at it like, there’s a plan in your life. You cross paths with people. Some people stick in your life, some people go different directions. To me, it’s one of those relationships where you cross paths with somebody, and it was meant to be, and it happened. The fruits of what you see happening are like, “Wow, this is definitely where I’m supposed to be right now.”

Rayne: “Oh, absolutely. And, I was actually just talking to a friend of mine the other day and I was like, ‘Man, it’s crazy, because this is the first time that I’ve actually felt like I am able to represent myself as the singer or the so-called artist that I want to be and be doing the music that I want to do.’ You know, ‘cause sometimes in bands it’s like, unless everybody’s exactly on the same page, someone else might write a song and be like, ‘We’re going to do this song,’ and it’s just not exactly a representation of yourself, if that makes sense.

PopMalt: “You kind of have to do what the band wants to do, and make some compromises.”

Rayne: “Yeah! And, it’s not that it’s a ‘bad’ thing by any means, you know? … I’m just using it as an example to say for myself—this part of my journey is really the core time when I’ve been like, ‘Man, this is me! This is a representation of Rayne Johnson.’ I get to sing the songs with the vocals that are natural to me instead of trying to sound like—you know, ‘cause when you’re in a band a lot times you’re playing cover songs and you’re singing Jason Aldean or Keith Urban, or whatever. That sort of puts you into a mold that you have to sort of sing like them for [the songs] to come across to other people the correct way, because they already know it that way.

PopMalt: “Right, right. And, now you’re able to do your own stuff.”

Rayne: “Exactly. And, I don’t say any of that like it wasn’t purposeful…I’ve even talked to some of my old band members and been like, “What we did together is what got me to where I’m at right now.’ I had one of the guys say to me, ‘Man, I wish that you would’ve went on this journey before, like while we were in the band. I feel like we might’ve stolen time away from you. And, I told him, I’m like, ‘Bro, if it wasn’t for that time, and me growing through all that stuff, I wouldn’t be able do what I’m doing right now.”

PopMalt: “They were stepping stones.”

Rayne: “Absolutely! In a good way, you know what I mean? They’re super supportive now, still. They’re super proud like, ‘We can’t believe what you’re doing.’ They’re like, ‘I always saw this in you’—there’s just one specific guy, he’s like, ‘I always saw this in you,’ and he’s like, ‘I wish that you would’ve’—he sort of has this feeling of like, ‘we held you back.’ And, I’m like, ‘No, man. I don’t want you to think that way, because I don’t think that way…What I learned from you guys, and as many times as we played out in front of folks and stuff like that—that helped me develop the artist that I want to be, and how I want to present myself on stage, and that kind of stuff. And, it even helped me know the kind of music that I want to play, want to do.”


After all these years of learning and growing from others, Rayne Johnson is now ready for the world to see his solo country career take off. Doors are opening left and right for him, and we’re happy for him! His latest single, ‘Front Seat’ was just released this summer and is already getting good traction on radio.

His EP will debut late summer, and, as mentioned earlier, he’s got some great shows lined up as well. Rayne’s a family man too, happily married with a son named Hunner. You can catch the latest from Rayne Johnson by visiting RayneJohnson.com