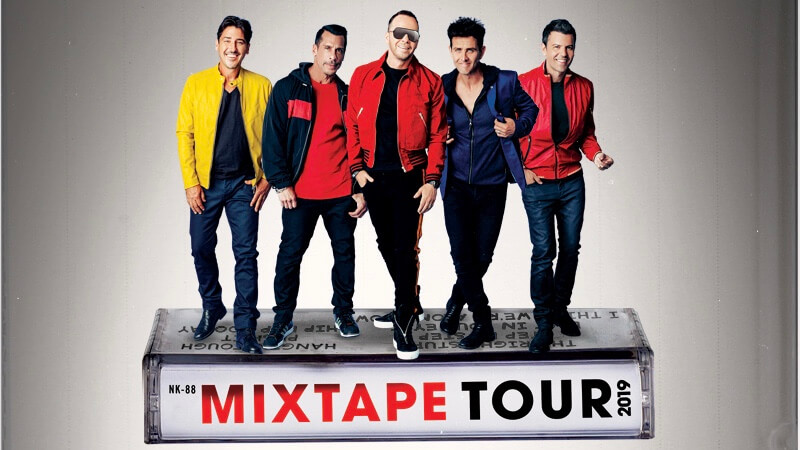 Were you a teenage girl in the late 1980s? Did you know how to do the ‘Right Stuff’ dance? Was there a poster of Jordan Knight on your wall? If you answered “yes” to any of these questions, then chances are you had a little bit of a freak out moment when you found out that New Kids on the Block were back on tour again. It’s okay. They still have that effect 30 years later.

That’s right! Last month, NKOTB came back to the playground to kick off their ‘Mixtape Tour’ and, can we just say, if there was a definition of nostalgia this tour would be it? The group is accompanied by a whole lineup of 80s and 90s artists including Tiffany, Salt-N-Pepa, Naughty by Nature, and Debbie Gibson, and this weekend we got to be a part of all the fun!

First off, let’s discuss what happened the moment we stepped foot onto the pavement of the Pepsi Center in Denver, Colorado. We hop in line, and what do we encounter? Multitudes, I mean multitudes, of middle-aged women that have clearly followed the band since day one. It was loyalty at its finest, and it was a great sight to see!

As the masses of us piled into the venue with great anticipation, an animated vintage boombox display with the words “Welcome to The Mixtape Tour” dominated the jumbotron. As everyone began to take their seats, a 1980s throwback playlist—*ahem*—MIXTAPE filled the air containing songs from legends like Prince, Paula Abdul, and Bobby Brown. Side ponies and leggings were a regular fixture of the audience spectacle. We were now ready for a show.

Illtown Sluggaz opened up the night, as Naughty by Nature’s Vin Rock hyped us up with hip-hop chants and classic rock anthems. The crowd was instantly pumped. Then, it was time for the moment of truth. The room went black, and the screaming began. The curtain dropped, and suddenly Jordan, Jonathan, Joey, Donnie, and Danny descended from the upper echelons. The crowd went wild. As Jordan’s faced blasted onto the screen, a swirl of giddy moms whipped out their cell phones to capture the moment. It was great to hear Knight’s classic falsetto vocals once again.

Throughout the evening, the group played a slew of classics from ‘Step by Step,’ to ‘Didn’t I (Blow Your Mind),’ to ‘You Got It (The Right Stuff)’—what an iconic sight watching the guys do that dance. After about half an hour, the Kids exited backstage for a costume change, and the screen transitioned to show a hot pink “Tiffany” logo. The crowd went wild all over again, and the stylish pop singer performed her number-one hit ‘I Think We’re Alone Now.’ A video montage of Tiffany’s career played in the background during the performance.

Fun fact—did you know that Tiffany was highly instrumental in helping NKOTB get their big break? Joey explained to the audience how the singer let the unknown boys from Boston chill with her in her dressing room one night before a show. She didn’t have an opening act and asked them if they wanted to go on. The rest is history.

Friday’s concert also saw female MCs Salt-N-Pepa bring the hip-hop flow, while Naughty by Nature had everyone saying “Hey Ho.” Debbie Gibson sang beautifully, proving to be just as good as she was back in 1987.

We were very impressed to see how the supporting acts fit into the set. Each artist received a thorough amount of time to perform more than once, which made for a good variety. There were also times when the boyband members would perform alongside of the supporting acts as well. For instance, Debbie sang a duet of her hit ‘Lost in Your Eyes’ with Joey—the two were literally standing on top of a grand piano while doing so.

There were also two stages—one at the front of the venue and one at the back, so there was never a dull moment. The entertainers regularly weaved in and out of the crowd while taking selfies with fans throughout the arena. At the end of the night, NKOTB (in their Boston Bruins jerseys of course) joined the whole ‘Mixtape’ squad on stage to close out the show. Seeing all of those faces next to each other was like stepping into a time machine!

This tour will be remembered for years to come, and it’s thanks to the dedication of the fans. The band made it very clear that it was because of their supporters that they’ve been able to sing these songs for over three decades. After all these years, the fans still knew every word to every song and were more loyal than ever. These were more than just songs. They were songs that carried them through life’s ups and downs. Wahlberg spoke for a couple of minutes on how the fans proved the critics wrong:

“30 YEARS STRONG! Can you remember when all the so-called ‘experts’ said a boyband could never last that long? They were wrong! But they weren’t wrong about us, they were wrong about all of you. They underestimated you! They thought all those years ago you were just a bunch of screaming crazy little girls who didn’t know nothin’ about nothin’…They never even considered that one day you were gonna grow up and be mothers and wives and teachers and doctors and lawyers…and it is only because of you that we are still here after all these years!”

Wow! And not only do those ‘crazy little girls’ still support you—their kids do as well. Donnie made sure that the younger audience had a great experience that night. On one occasion he serenaded a little girl on stage. On another occasion he went into the crowd, picked up a little boy, sat him on top of his shoulders and rocked out to ‘Tonight.’ And, so the legacy lives on from one ‘Kid’ to another.

Visit nkotb.com to purchase tickets to the ‘Mixtape Tour’ today!