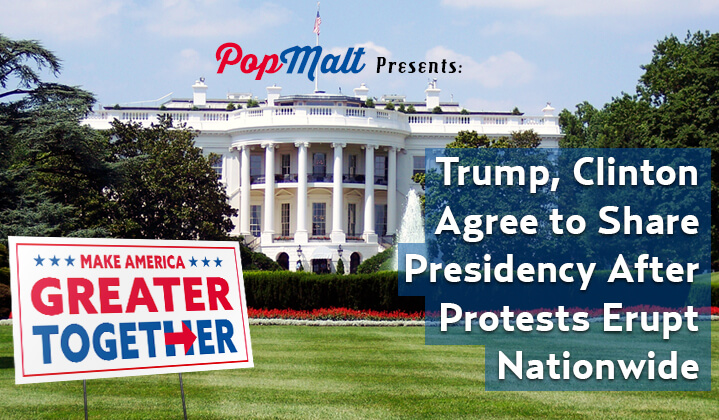 WASHINGTON DC—In the days following Donald Trump’s upset win of 2016’s Emmy Award-Winning season of Presidential Idol, also referred to in the biased and rigged media as the 2016 Presidential Election, the real-estate mogul and the former Secretary of State, Hillary Clinton have reportedly agreed to a groundbreaking co-presidency arrangement. In this historically unprecedented move, tentatively called the “Make America Greater Together” initiative, Trump and Clinton have single-handedly ushered in world peace—at least in America.

“If I had known that making America great again would have caused this much divide, I probably never would have ran for president—probably not,” Trump said during a joint statement to the press. “Secretary Clinton and I have a lot of differences, but after I saw how much my win, and it was a huge win, was devastating so many young people, this deal was a no-brainier. I called Hillary right away. I leaned into the phone, with tremendous temperament mind you—I was very calm, and I said to her, I said ‘Hillary, let’s do this together for the kids.'”

“When Donald called me at three in the morning, I thought it was just more of his bullying,” Hillary began her speech, “but when he explained he was at a victory party in Russia, and that it was simply a difference in time zones, I was all ears. At one point, he said ‘Hillary, people love me, everybody loves me,’ and I had to be honest with him that reality reflected something different. We talked for hours and sorted out our differences. By the end of the conversation, we were both laughing and telling each other ‘No, you hang up first.'”

“I’m a very tough negotiator, very tough,” said Trump, “but when Hillary told me how many kids were missing class over this and holding signs that said ‘fix this [expletive],’ I hate to tell you, I felt very very bad about my win. Those who voted for me were being very mean with how much they rubbed it in, much like how I treated Rosie when I got her fired—and she deserved it, everyone knows it. Hillary’s supporters were having such a hard time though. Nobody loves Hillary’s supporters more than me, nobody. It was terrible for them, so I fixed it. I fixed it big league.”

“This was not an easy decision, but it was the right decision,” Clinton said to thunderous applause, “Instead of him going low and me going high, we are joining together to make America high. Instead of future generations spending billions of dollars on presidential elections where there are clear winners and losers, we can finally put losing behind us and we can all go forward as one nation of winners. This will be an election system for all Americans, not just those with more electoral college votes. As a matter of fact, Donald Trump and I have agreed to co-author a bill that would change the American Promise to ‘life, liberty, and the presidential candidate you voted for always winning.'”

The full details of the deal have not been made public yet by either party, but the basic agreement is that Trump and his team will oversee all matters involving emails, while Clinton and her staff will have exclusive access to the White House’s Twitter account, as well as handling other obvious tasks such as hiring the position of official White House staff barber and making sure Trump doesn’t start World War III. “Donald has agreed to completely end his use of orange tanning lotion,” Clinton said, smiling from ear to ear like an emoji, “And I’ve promised to limit my Botox injections to once a week.”

When asked how they would tackle polarizing issues, they admitted there was still a lot of work to do, but that they had already found some common ground. “I’ve agreed not to build the wall,” Trump stated. “Instead, we’re going to order a huge welcome mat,” Clinton interjected. “It’s going to be so huge, believe me,” Trump said in a brief touching moment as they bumped heads while leaning into their shared podium microphone. Then, the sky opened up, a tremendous light shone down, and Morgan Freeman’s voice boomed majestically, “Well done, America. Well done.”