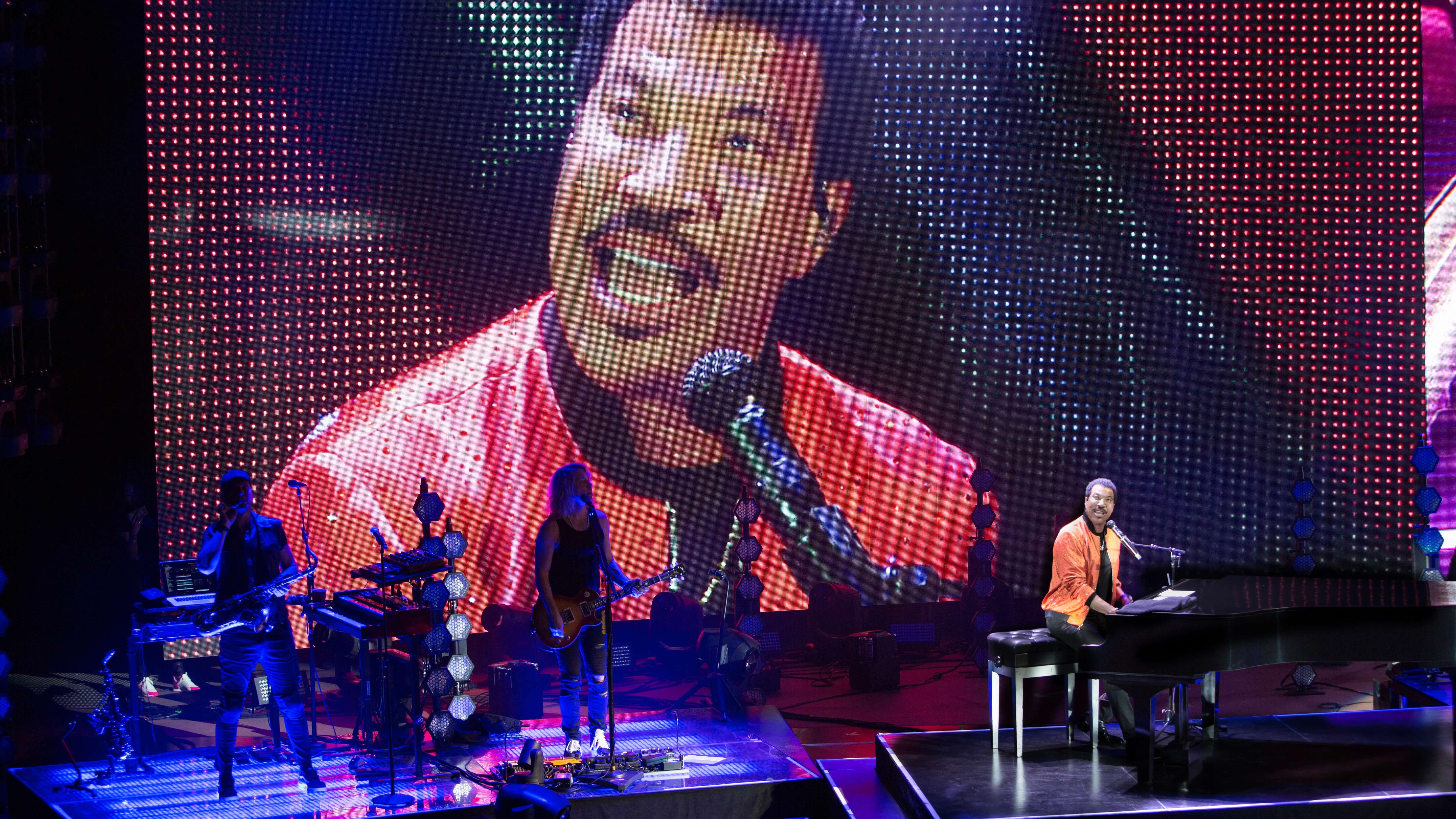 Well, the ‘Hello Tour’ has been in motion, and Lionel’s been playing all the hits! That’s right, the Grammy Award-winning R&B legend wraps up his 32-show tour this month, and last night he played the famous Red Rocks Amphitheatre! Morrison, CO was grateful to have the icon grace them with his presence as they jammed out ‘All Night Long’ to a set filled with nothing but the classics!

The song list included hits from his solo career as well as his early days with The Commodores. The family-friendly show featured fan favorites such as ‘Say You, Say Me,’ ‘Stuck On You,’ ‘Easy,’ and of course, ‘Hello.’

For ‘Endless Love,’ phones zoomed out instantly when Richie teased that Diana Ross had never sang the ballad live with him for 35 years. Was this the night that everything changed? The crowd got excited at the thought that Ross could’ve actually made a surprise appearance. Richie decided to announce her to see what happened, “Ms. Diana Ross!” Lionel runs over to stage left with anticipation. A couple seconds go by. The cheering begins to die down. Richie gives us the cold, hard truth, “Y’all can sit down. The moment ain’t coming.” Rats! Please, Diana! We need you to perform ‘Endless Love’ with Lionel once and for all! The world needs this! Ah, well. Maybe next time.

On the bright side, Richie decided to let the women of the crowd sing Diana’s part. With all those female voices singing in unison, it was clear that hundreds of voices grew with ‘Can’t Slow Down’ posters in their teenage bedrooms nearly 40 years ago. Back in those days, Richie took “easy listening’ to a whole new level, and now those teenage moms are passing on his music to their children as well.

Let’s talk about the visuals now. ‘Hello Tour’ features Richie in various costume changes to keep the show alive. One of our favorite outfits was his bronze-colored slim-fitted bomber jacket with the tour logo on the back—very relevant look for today. High def closeups of Lionel’s face, as well as shots of his hands sliding across the grand piano provided a front-row experience even for the furthest nosebleed seats. No squinting at this tour. The piano was also featured on a raised stage that eventually made way for lift off as the night progressed.

Richie’s multi-era backdrop graphics were outstanding. Many of his songs were accompanied by 2019-style lyric videos containing vibrant colors, beautiful text overlay, and a montage of dancing silhouettes. This especially was the case during ‘Dancing on the Ceiling’ when a EDM light show descended from the upper stage echelons. It brought even the most introverted person out of their shell.

His ensemble featured various standout performances including supreme harmonica, sax, guitar and slap-bass routines. Speaking of slap-bass, Richie brilliantly tipped his hat to his Commodore-era funk colleagues Ohio Players by playing 1974’s ‘Fire.’ We could literally FEEL the fire, as hot flames shot out from the back of the stage. Wow. Whoever the creative director of this show was knew exactly how to use pyrotechnics to their advantage. The song surely was an interactive experience.

One of our favorite moments of the evening was how frequently Richie acknowledged his fans. He began the show by telling everyone to introduce themselves to their neighbor on the right and left. This show wasn’t just about him, it was about everybody. As the show rolled on, his lighthearted behavior was contagious. Jokes, stories, and more jokes. It wasn’t like he had a bunch of punchlines just ready to go, however. He was simply talking, as funny after funny emerged from his mouth.

Towards the latter half of the concert, he set the record straight that the world he lives in as a celebrity is the same world that we (normal people) live in. He didn’t write the songs from the glamorous mountain of “Hollywood Utopia.” He wrote the songs that we all love from the plains of reality. Our problems were his problems.

He then used this to transition to the world anthem we’ve all come to know and love, ‘We Are the World.’ Richie co-wrote that song with Michael Jackson, in case you didn’t know. The ‘USA for Africa’ anthem roared once again from the mountains of Colorado 34 years since it’s debut.


Richie, of course, saved the tour’s title song for the end of the evening by explaining to the crowd that, no matter where he is in the world, international voices alike can take part in singing one word together: ‘Hello.’ The famous chord progression in A minor was a great way to seal the tour, along with the tropical ‘All Night Long’ for the encore. Lionel Richie’s ‘Hello Tour’ excellently rebirths classic hits with a modern-day expression.

There’s still time to purchase tickets to the remainder of the ‘Hello Tour’ too! Visit lionelrichie.com for more info!