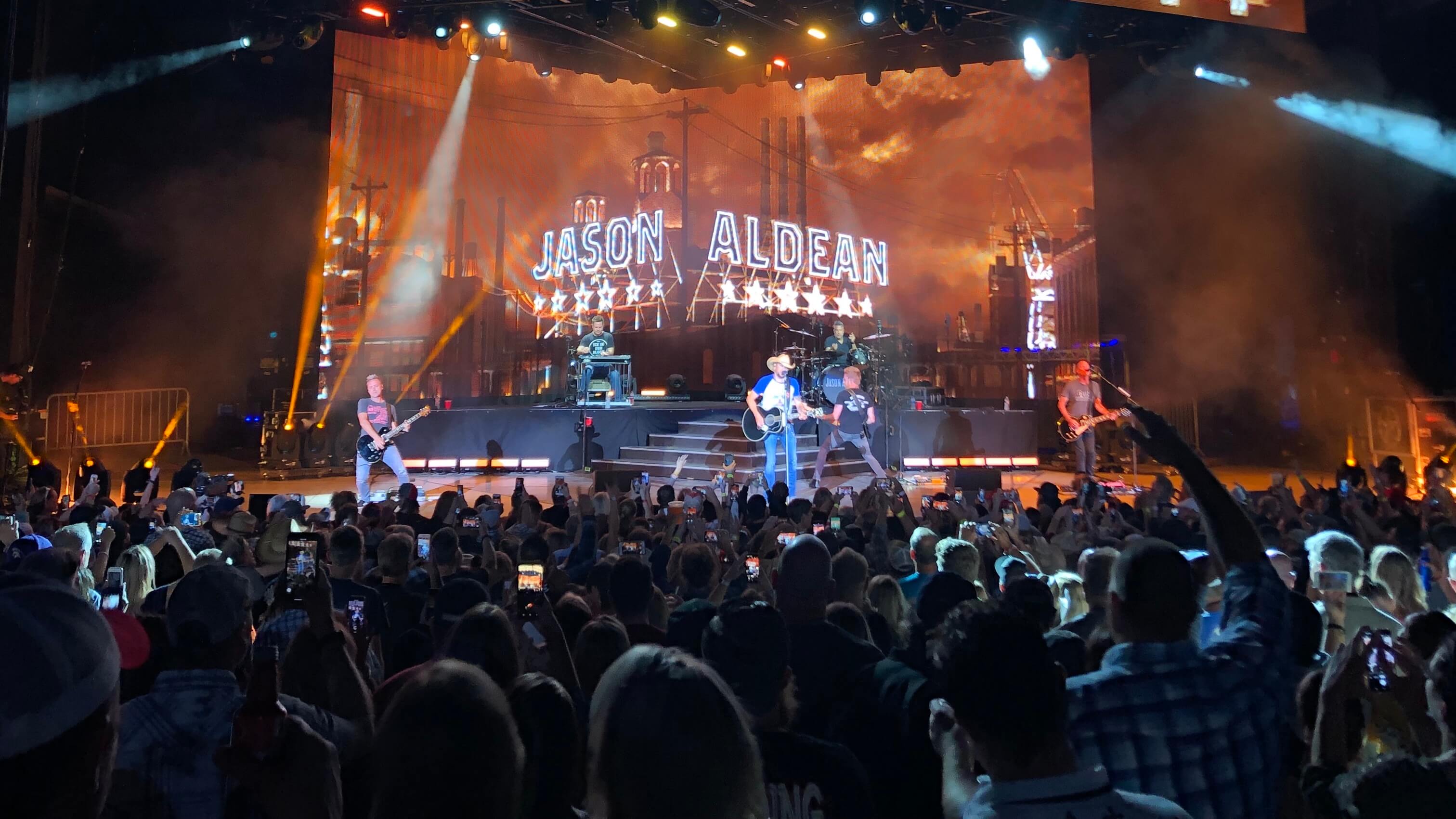 The ‘Ride All Night Tour’ is in full swing, and this weekend at Fiddler’s Green Amphitheatre, country music superstar Jason Aldean did not disappoint. His 10th headlining tour features hit sensations Carly Pearce and Kane Brown. Together, the three artists provided a triple threat of talent throughout the night.

Carly Pearce started out the night with songs from her ‘Every Little Thing’ album as well as her latest single ‘Closer to You.’ She got the crowd pumped up just right while wearing jeans shorts and stilettos. Her positivity was a perfect way to start out the summer night.

After Pearce, was Kane Brown. The 25-year-old is a refreshing sight for country music, as he represents one of the modern-day expressions of the genre. You’re not going to see him in plaid, boots, and a cowboy hat. Brown comfortably rocked his ‘KB’ snapback and hoodie, along with Jordans. He didn’t take himself too seriously throughout his time on stage either. It was clear that he was having a good time on stage as he would occasionally insert hip-hop inspired dance moves here and there just to keep fans on their toes.

His set included popular songs ‘Baby Come Back to Me,’ ’What Ifs,’ and ‘Heaven.’ Fans also enjoyed Kane’s recent song ‘One Thing Right’ with EDM producer Marshmello. The accompanying music video on stage had everyone smiling and bobbin’ their heads at the awesome mixed-genre collaboration. Today is truly a day where mashups have no limits and musical barriers continue to be broken down. The crowd went wild when Brown performed ‘Homesick’ and a video montage was seen of U.S. troops overseas sending greetings to their family from afar. It was truly an honorable moment.

Then, it was time for the main event. Mr. Jason Aldean made his entrance with an illuminating sign showing his name in bright flashing lights.

Throughout the evening, Aldean made it very clear that he was there to have a good time, and wasn’t going anywhere anytime soon. We appreciate a big headliner like Aldean putting his fans first. The megastar shined for over an hour and a half and played hits all the way from 2005 till now. Remember ‘Hicktown’? What about ‘She’s Country’? Oh, yeah. How about ‘The Only Way I Know’ with Luke Bryan and Eric Church? Yep, that one too. He played the more modern hits from ‘Rearview Town’ like ‘You Make It Easy’—By the way, it’s awesome to know that Florida Georgia Line wrote that song. Just sayin’. You better believe Aldean had his ‘Dirt Road Anthem’ ready to go as well. Everyone was anticipating that classic rap verse.

Speaking of rap music, Jason Aldean really shows a love for hip-hop. Dee Jay Silver regularly played songs from the genre, as well as a wide variety of others between set transitions. Aldean truly made history when he released ‘Dirt Road Anthem’ (and especially the remix with Luda) by combining two very unlikely sounds together. This set the tone for music’s future, as artists like Florida Georgia Line and Lil Nas X. And, yes. ‘Old Town Road’ was definitely played that night too.

His stage design was phenomenal. The interactive set showed various virtual settings that provided the backdrop for Aldean and his band. The stories to his songs came to life with settings such as a truck stop, a desert, and even a drive-in movie theater. This really helped paint the narrative to his storytelling.

His band was the best of the best. The subtle excellence of the steel guitarist, the passion of the drummer, the groovy vibes of the bassist, and the lightheartedness of the lead and rhythm section showed love and support for their frontman. The band was in sync all night and didn’t miss a beat. It was apparent that these melodies and time signatures were in their blood.

We haven’t had the pleasure of meeting him, but just by watching his presence on stage, Jason Aldean comes off like the kind of guy that you could kick it with on the weekends. He seemed very approachable. I think fans in the front row got a taste of this when he regularly gave high fives throughout the night while cutting across the stage with his sweat towel and chain hangin’ from his jeans. He was chill! He was one of us! And, I think that translated very well to fans alike all night. He’s the real deal. Matching the record? Oh, he was on point. You know he’s been in and out of more bars and venues than you can count in order to zone in on his musical craft. He’s made a very fruitful career for himself, and we’re proud to say that we could experience a small part of his journey.

Purchase tickets to the ‘Ride All Night Tour” at JasonAldean.com/tour/.