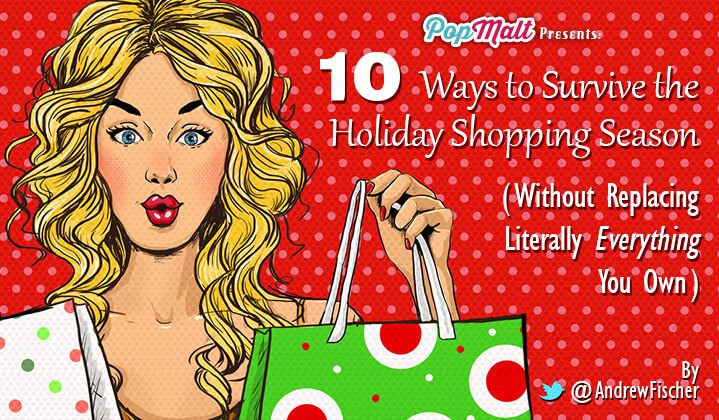 It’s that time of year again. Yes, the time of year when we give thanks for all that we have and then immediately rush to the store and beat each other senseless, filling our carts with better versions of the things we were thankful for just a day ago.

Contrary to popular belief, life goes on for those who manage to avoid Holiday shopping fever. In fact, many people find that staying home on such colossal shopping days as Black Friday, Super Saturday, and most weekends in December is actually more fun than freezing their butts off, waiting in long lines, and wishing everything they owned was better. Here are ten things you can do as we enter the the Holiday shopping season that don’t involve braving the elements, facing large crowds, and spending ungodly amounts of money.

10. Stay Home and Watch the TV That You Already Have

Most people living in Western cultures own at least one TV. Interestingly enough, all TVs created in the past decade can be connected to both a DVD player and a Blu-Ray player. In case you didn’t realize, most media can be played on smartphones, tablets, and even older computers. Studies have shown that people who don’t go out and spend $1,000 on a new TV this year will actually have an estimated $1,000 additional cash in their bank account.

9. Stay Home and Wear the Clothes That You Already Have

Most people in the world own clothes. In fact, unless you’re the type to read articles such as this while in the bathroom, chances are that you are fully clothed even now. While fashion companies spend billions of dollars a year trying to convince you that the clothes you are wearing today aren’t going to be in tomorrow, multiple studies conducted by older people over the course of the past several decades have provided conclusive evidence that most clothing items can last for 10 and 20 years at a time without wearing out. In fact, according to several men surveyed, underwear works just as well with a few holes in it, unless those holes are in very specific spots. Even then, rotating the underwear ever-so-slightly can often provide the wearer with up to 6 more months of regular use.

8. Stay Home and Eat the Food That You Already Have

Considering the fact that Black Friday takes place on literally the day after Thanksgiving, chances are that most people have leftovers of some sort. While studies have been inconclusive as to whether or not all families who celebrate Turkey Day actually have leftovers the next day, experts can agree that on average, the majority of people in Western societies really do have other food in their refrigerators such as eggs, bread, jelly, etc. Many people also reported having cereal and milk readily available. Canned food, a staple in most food pantries, has also been known to be edible on busy shopping days instead of going out to spend money on more food.

7. Stay Home and Play With the Dog or Cat That You Already Have

While many people find the experience of playing with a new dog or cat to be far superior to playing with their older pets, you will find that often times, older pets still feel loved when you spend time with them. It’s also important to note that new pets are known to destroy furniture, carpet, and even flawless paint jobs on cars. While most pet owners will agree that old pets also are known to cause such damage, it’s no secret that pet owners are more likely to forgive an older pet for such activity as opposed to simply chucking them out the window in a frustrated frenzy, something frowned upon in most civilized societies.

6. Stay Home and Listen to the Music That You Already Have

In this age of readily accessible digital music through services such as iTunes, Spotify, Pandora, etc, many people would question going to the store and buying a physical CD in the first place. Those who still feel the need to do this, however, should know that new music actually isn’t as good as old music anyway. Multiple international studies conducted by real people with real taste in music have unanimously concluded that music from the 80s, 90s, and earlier was actually created by people with much more talent than those who call themselves musicians today. Further studies have shown that newer ‘music’ by artists such as Kanye West, Beyoncé, and Justin Bieber actually sucks.

5. Stay Home and Use the Smart Phone That You Already Have

New smartphone models come out every year, and this year is no exception. Most of these phones boast amazing new features such as taking slightly better pictures, loading web pages a little faster, and having to buy a brand new case for $50. Most new smartphones have retained talking functionality, despite its drastically decreasing use among phone owners. Research has shown time and time again that people who already own a smartphone, really do already own a smartphone, and therefore don’t need a new one. Research has also repeatedly proven that while new smartphones usually cost $500 to $1,000, people who keep their old phones are able to not only save this money but also still call and text all their friends who buy new phones.

4. Stay Home and Sit on the Couch That You Already Have

Many couch owners complain regularly that their couch is older, out of style, or has food stains on it. What many of these people don’t realize, is that these food stains can come right out if you take the time to clean them. Also, as for furniture being out of style, antique furniture is actually making a serious comeback of late. People pay extra for that older look, especially if it looks good in a room with shag carpet. Alright — shag carpet may be going too far, but even so, it works just as well to walk on as new carpet. In fact, many old people have suggested that it’s just fine.

3. Stay Home and Read a Book That You Already Have

Despite the fact that around 1 million new books are published every year in the US alone, re-reading a book that you already have can still be a highly entertaining experience. In fact, in certain studies, it was even concluded that not all new books are actually better than old books. Those who don’t own any books and don’t want to spend money will be interested to know that across the United States (and many other countries), public institutions known as libraries exist where books can be borrowed for short periods of time. Who knew?

2. Stay Home and Play the Video Games That You Already Have

Nearly every video game expert who knows anything agrees that Super Mario 64 is the best video game of all time, with Mario Kart 64 clocking in at a close second. Why spend your hard-earned cash to buy new games such as Call of Duty and Assassin’s Creed when you could just stay at home and play classic games of old? While kids today may claim that older games suck, in reality it’s these kids’ taste in games that actually sucks.

1. Stay Home and Cherish the Loved Ones You Won’t Always Have

Switching gears now to some more serious thoughts, while society will tell you that you need to buy more things to be happy, isn’t it odd that these things never seem to be able to do just that? Electronics wear out, music gets old, and uneaten food goes bad. This is not a phenomenon; it’s just life. In fact, life itself doesn’t last forever. Years from now, when all your new toys and gadgets are buried in a landfill somewhere, you might just wake up to the sad realization that some of the family and friends you once loved are buried in cemeteries themselves. You can always buy new things, but you can’t always spend time with your loved ones. So, when Black Friday kicks off the Christmas shopping season this year, why not keep your bank account in the black by staying home and enjoying the things you already own with the people you won’t always have.

What are your Holiday shopping traditions? Do you prefer to wait in long lines for stuff you don’t really need, or relax at home with your loved ones by the fire? Do you do most of your shopping online or do you enjoy beating the streets? Let us know in the comments section below. If you enjoyed this article, please share it with your shopaholic friends!