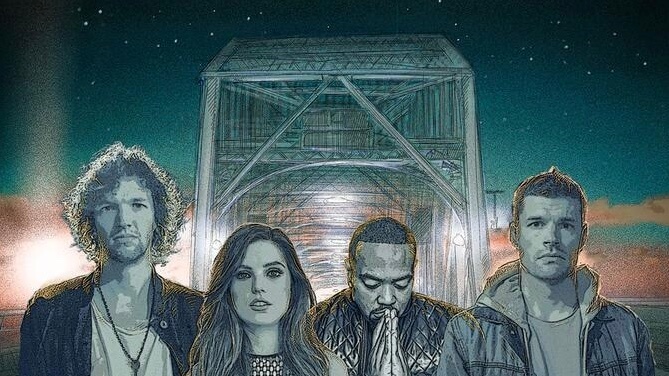 This month, Echosmith’s Sydney Sierota was featured on the Timbaland remix of ‘God Only Knows’ by for KING & COUNTRY. We spent time with the 22-year-old to discuss this, as well as other work the band has done this year.

PopMalt: “It’s awesome to hear that you’re collaborating with for KING & COUNTRY!”

Sydney: “Yeah, right? It was a really—I mean, it kind of came out of nowhere, that collaboration—which is why it’s so fun for me, because I have loved them for a long time…It just literally came out of nowhere, and the opportunity came up, and I was so excited that it was done within a week or two… Then, here we are, and the song is out just another two weeks later. So, haha, it was a really fun collaboration that I didn’t even know was possible, but obviously [that] I’m really, really excited about.”

Sydney, who grew up in Chino, CA, gave us the backstory of how the collaboration came to be. Singer Moriah Peters, who’s married to Joel Smallbone from for KING & COUNTRY, grew up in Chino as well, and is a friend of Sydney’s father Jeffery David (songwriter/producer – Zedd, Hunter Hayes). Peters and Smallbone recently visited David and mentioned the remix of the song.

“They were just talking to my dad about what was going on, and that they had this Timbaland remix of their song ‘God Only Knows,’ and how they were, you know, kind of looking for someone to feature on it—hopefully in the pop world—and my dad was like, ‘Well, I mean, Sydney might be into that…’ And, haha, I remember him texting me pretty soon after being like, ‘Hey, would you be into this?’ And, I was like, ‘Of course!’ And, then once I heard the actual remix—I loved the original song—once I heard the remix, I fell in love with it, and I literally told my dad—I said, ‘I’ll sing this tomorrow if they want me to sing on it.’”

Sierota continued about the connection that was made, “So, I was just dying to be on it, ‘cause it’s such a good song, and the remix just took it to another level; but, the message of it was so important, and that’s really why I wanted to be a part of it. So, I’m just grateful that they were down to have me sing, and to do it so quickly…We just talked over FaceTime and text, you know, about notes for the song, and to make sure it was perfect…Then, we finally got to meet in person when we were shooting the video two weeks ago.”

This is how the industry works nowadays. Because of the convenience of technology, artists have been able to make music with one another without distance getting in their way. Timbaland expressed how pumped he was about the collab as well:

Sydney elaborated on her connection to what the song is communicating.

PopMalt: “So, you’re able to relate that song to your personal experience too?”

Sydney is featured on the second verse starting with the line, “You keep a cover over every single secret / So afraid if someone saw them, they would leave.” Sydney mentions this line as one of the lyrics she can especially relate to, “That’s something that I’ve really struggled with, because, you know, I have the tendency to feel like I have to be perfect and come off as perfect…you know, act like everything is ‘totally okay’ and I’m ‘perfectly happy’ as is…It’s just something to learn as I have gotten older—which, I’m only 22. So, I have so much to learn still.”

Vulnerability is the key, she says, to giving fans a way to relate to their music, “It’s been something to learn to become vulnerable, and to see the value in vulnerability…being honest with yourself and also the people around you and with our fans, because they need to know that ‘It’s okay that you go through hard times, because you can get through it.’”

Sierota puts it into perspective, “If you don’t address going through hard things it can come across as, ‘Oh, well their life is perfect and they can’t relate to me,’ when…everyday, you know, something else could come up, and I could be going through something that’s very similar to what one of my fans is going through, or one of my friends. So, that line…you know, hit home for me as a good reminder to stay honest with myself and everybody else.”

This isn’t the only time this year that Echosmith was vulnerable musically. Back in March, the collaborative effort ‘Favorite Sound’ with American DJ Audien was released. Lines like, “I tend to be my own worst enemy” and “Shouldn’t apologize for just existing,” address the battle that negative thoughts bring; and, for anyone who’s ever dealt with depression, anxiety, or suicidal thoughts, this song especially is a lifeline to latch onto.

“That song in particular is really personal for me, because I can deal with so many thoughts at the same time—whether they’re negative, or if it’s just random thoughts just swarming my head…I just can’t seem to focus on something…It’s really cool to talk about, because there have been a lot of fans who have said, ‘Oh my gosh, I feel that same way,’…Negative thoughts can just take over…they love to just, you know, put the positive ones on mute.”

The songwriter explains how she’s been learning how to take a negative thought and turn it into a positive instead of simply avoiding it, “I know I can do that sometimes where I’ll just tune out and watch TV, because I’m nervous that I’m gonna get sad or, you know…realize what’s going on in real life…I think it’s important that we deal with it and not ignore it, because that can make whatever it is that you’re going through so much worse…I think all of us really need that reminder.”

With over 1 billion streams, it’s good to know that the band is still intentional about knowing why they do what they do, “For us, with music, and just with our lives, we’ve made it a goal to really spread love and hope…Hope is such an important thing…You go through hard things and everybody experiences different extents of that, but hope is what’s so important, because you will go through hard things; but, there is a light at the end of the tunnel…”

Recent songs like these have brought hope to multitudes, while allowing the band to explore new musical horizons as well. ‘God Only Knows,’ ‘Favorite Sound’ and ‘But Us’ with Florian Picasso (Pablo Picasso’s great-grandson) are all examples of how Echosmith has been able to expand their creative expression from the indie rock world to the pop, hip-hop, and EDM world. That, mixed with lyrics that mean something, is a recipe for long-lasting success.


For all the latest on Echosmith, visit echosmith.com and @echosmith on all social media outlets.
FacebookTwitter
GoogleMailLinkedinhttp://popmalt.us7.list-manage1.com/subscribe?u=cffb5145263313488d8c30f76&id=48f610d8efWhatsappPinterestDiggRedditStumbleuponVkBufferTumblr