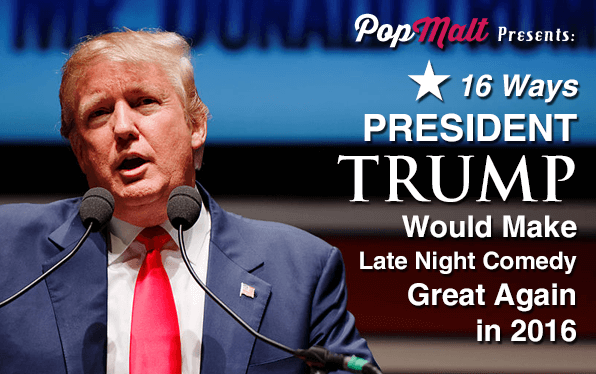 There’s no doubt about it; Donald Trump knows how to generate media buzz. The host of NBC’s Apprentice and now presidential contender says what he means and means what he says. He’s worth 9 billion dollars, he has the most iconic head of hair in the world, and he’s promising to “Make America Great Again” if he wins the presidential election in 2016. While the American public will certainly have to decide for themselves if he’s the best choice for the 44th president, there’s little question that a President Trump would make quite a few things great again, starting with Saturday Night Live. His announcement of his 2016 presidential bid has literally thrown late night TV into a comedic feeding frenzy. Patience, people. There’s plenty for everyone. Here are 16 reasons voting for the Donald in 2016 could make the news, late night comedy, and a whole bunch of other things in the media great again going forward.

Full disclosure: The opinions expressed in this article are merely satirical. As an entrepreneur myself, I actually have a significant amount of respect for Donald Trump and the incredible business success he has had. I also follow him on Twitter.

16. Donald Trump Knows the Art of the Deal

Not only has he written a book called “The Art of the Deal”, but he really knows his craft. For example, here’s a fly-on-the-wall peek into one of these such deals as it went down.

15. Donald Trump Will Create (and Save) Jobs

Comedians such as Frank Caliendo have been doing tremendous Donald Trump impressions for years now. With a Donald Trump presidency, people like Frank will be able to sleep at night knowing their financial future is secure for at least another four years.

14. Donald Trump Will Be An Honest President

There’s no question about it. The Donald speaks his mind. When Rosie O’Donnell said inaccurately that Donald had a bankruptcy in his past, he went to war with her on the media and let the world know how he really felt about her.

With his real estate background, the White House as we know it may be in for an extreme makeover. Maybe not quite this extreme, but 9 billion dollars can most likely go a long way.

12. Donald Trump Will Put Others First

Don’t fix somebody else’s hair until you first fix your own. Right? Well, the Donald doesn’t believe in this. Here he is taking a little off the top of WWE CEO Vince McMahon (01:50).

11. Donald Trump Produces His Own Material

When the late night talk shows run out of material, the Donald steps in with his own. Here he is firing president Obama, in classic Apprentice style.

10. Donald Trump Knows How to Get to the Bottom of Things

When celebrity Apprentice Omarosa made a bold claim about Piers Morgan behind his back, the Donald knew exactly what to do in order to figure out what exactly was going on.

9. Donald Trump Can Impersonate Himself

While Donald Trump is a popular celebrity to impersonate, you just can’t beat the real thing. Here, Donald Trump delivers a spot-on impression of himself as himself.