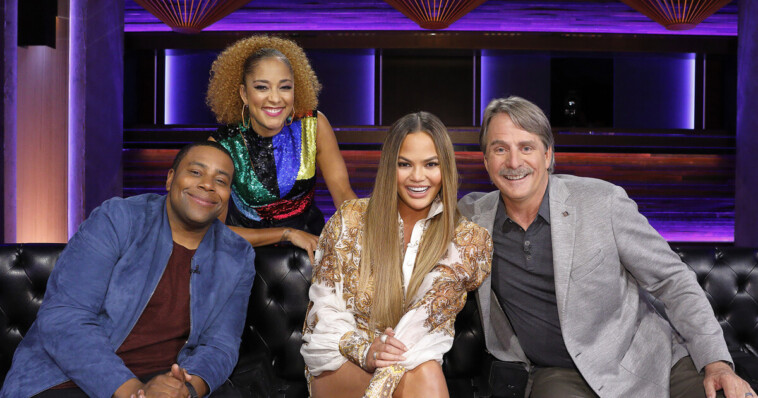 July 9th sees the premiere of NBC’s new comedy competition ‘Bring the Funny.’ The summer show will feature Kenan Thompson, Chrissy Teigen, and Jeff Foxworthy as judges. Foxworthy chatted with us and let us in on some cool things we can expect from the hot new series.

PopMalt: I’m really excited about this new show that you’re on, ‘Bring the Funny.’ It looks really good.

Jeff: I’m excited about it too! It was something new for me to do something like this. What kind of intrigued me about it was, NBC said, “You know, any time you’ve ever seen comedy”—like, you know, you had ‘Last Comic Standing,’ but it was all standup; and they said, “but there’s a lot of ways to make people laugh…”

He mentions the various forms of comedy that exist in addition to standup including sketch, musical comedy, and magic. “We don’t want this to be just standup. We want it to be every way that people laugh,” Foxworthy said of the network.

‘Bring the Funny’ is billed as: “A competition series for the next generation of comedy lovers,” and the winner will receive a grand prize of $250,000. The panel of judges features three people from diverse career backgrounds providing insight from across the board, “I’ve been doing standup [for] 35 years. I kind of know standup a little bit,” Jeff says jokingly. “Kenan is the longest-running cast member on SNL, so he’s got sketch down, and Chrissy—‘Chrissy,’ I said, ‘you’re the most important judge,’ because, while she’s this giant social media influencer, she’s not really a ‘comic.’ She just knows, ‘Does it make me laugh, or does it not make me laugh?’”

Foxworthy speaks of the great chemistry the judges had when filming the 10-episode series, “Any time you do TV you’re being thrown together with—I mean, I had never met either one of them…so, you know, you have that thing, ‘Are we gonna get along? … And from day one it was great!” Jeff mentioned how his millennial daughter reacted when she found out he’d be working with Chrissy Teigen:

Jeff: You know, my daughter was like, “Well, dad, Chrissy’s so cool and hip, and you’re just like an old fuddy-duddy. I’m—I’m worried about this!” Well, Chrissy and I got along fabulously!

PopMalt: Of course you did!

Jeff: So, I’m laughin’ at my daughter, ‘cause all she knows is I’m “dad,” you know, just old boring dad; but, I mean, we loved each other!

He also talked about the friendship that developed with Thompson as well.

PopMalt: With Kenan, did you watch him on SNL?

Jeff: I watched him before SNL!

Jeff: You know, when my kids were growing up…they watched ‘All That’ and all the ‘Good Burger’ stuff…It was fun for me to kind of pick his brain about sketch…So, like, as we’re watching—‘cause we have a bunch of sketch troupes and things and…so, I would ask him…“What are you ‘watching’?” You know…and Chrissy would ask me that about standup, “What are you seeing that I’m not seeing?”

Jeff elaborates on how Thompson would carefully study each sketch, “It was fun for me to pick Kenan’s brain—‘cause he wouldn’t just be watching the person that was talking. He would be watching the whole ensemble and making sure everybody stayed engaged, and I’m like ‘Oh, okay. I get it.’

PopMalt: After all these years…When you’re on a show like this, do you feel like you have all this wisdom and knowledge to pass on to these comedians on this show?

Jeff: You know…what was funny…I kind of worried. I’m like, ‘Well, I’ve never judged anything, you know. Do I know what I’m doing?” But, I would be giving people advice, and as I’m giving it I’m kind of thinking, “How do I know this?” Well, I know it because I’ve been doing it for 35 years!”

It’s sink-or-swim in the world of comedy to say the least. “If you want to be a musician you can go to music school. If you want to be an actor, you can go to acting school. There’s no ‘comedy school.’ You learn to be a comic by hanging out with comics and just doing it…So, when you’re able, you know, to get advice from somebody that’s done it, it’s like gold.”

Jay Leno played a huge part in helping Jeff during the early years of his standup career, “Like, Leno? I mean, even back in the mid-80s, he was always so generous with his time. You know, you’d go to the IHOP at midnight and he would sit around with open-mic guys and just say, ‘Yeah, here’s what you need to do…” He would just, you know, freely give you advice, and it was like gold.” (Jeff does an amazing Leno impression, by the way.)

Mentor-moments like those helped Jeff eventually reach his big break on ‘The Tonight Show Starring Johnny Carson,’ “I was telling somebody, ‘If you come in my house you wouldn’t know I was a comic.’ I mean, it’s not like I have platinum albums on the wall, or posters or anything; but, right next to the kitchen there’s like a little set of shelves…I do have an 8X10 picture of me sitting in the chair talking to Johnny, and Johnny’s got his mouth wide open just gut laughing.”

Jeff continues, “That’s all I ever wanted to do. You know, ‘cause when I started— for a comedian? That was Mt. Everest. I got called to the couch and I made Johnny laugh. You know, that was…that was career changing…The next week, hotels in Vegas are calling, ‘Do you want to headline?’ And, I’m like, ‘Well, I’m not any funnier now than I was a month ago, but yes I do! I do want to headline!”


For Jeff, it’s a pleasure to be on the show to give advice to other comedians, “It’s nice to be able to share that stuff with somebody! And, I was blessed ‘cause I had older comics that shared that stuff with me!”