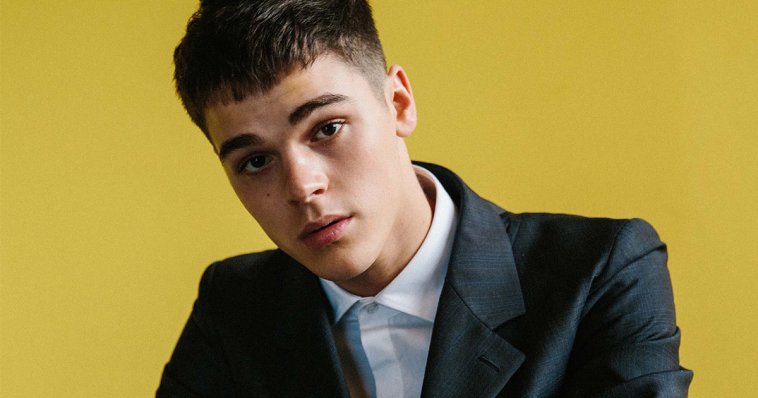 It was about a year ago. I was scrolling through Insta as I do often, wondering where some good musical talent lied.

One day, I stumbled across this kid’s page and noticed that he regularly posted covers of himself singing. I thought, “Cool. Let’s check him out.” So, I click on this video of him playing the ivories while wearing this fresh Adidas tracksuit. He’s singing “Never Be the Same” by Camila Cabello. And guys, when I heard that cover? Immediately I was like, “Ooh.”

He’s playing this already-catchy pop song, but is suddenly adding passing chords to the mix like we’re going to church! Suddenly, I need to break out my fan and hankie! He’s doing vocal runs smooth like butter dripping down a stack of pancakes. I’m like, “Okay, AJ Mitchell! I see you!” And, apparently, a million others saw him before I did. This guy’s social media game was on point. After watching that cover, I was a fan.

So, over the next week or two, I began following his page. He also had some singles on Spotify, so I checked those out too. Then, the day came where he posted a picture of himself standing in front of a television. On the TV screen, it read, “Epic Welcomes AJ Mitchell.” AJ had been signed.

The singer-songwriter now has a 6-track EP entitled ‘Hopeful’ under his belt, 1.4 million followers on Instagram, and his very first headlining tour starting April 25th. With appearances on ‘The Today Show,’ at the Kids’ Choice Awards, and a radio promo tour, Mitchell will be a household name in no time. AJ opened up to us about his upbringing and the process that led to this point.

Growing up in Belleville, Illinois, a small town with a population of approximately 42,000 people, AJ grew up a kid in the midwest. And, unlike many children who are glued to technology all day, AJ pretty much lived the opposite.

AJ: “To be honest, I didn’t watch that much TV growing up. My parents never really wanted us watching TV. They wanted us outside, haha, and being active. When I did have time, I definitely watched Spongebob, haha.”

PopMalt: What’d you do outside? Sports or other things like that?

AJ: “Yeah, I did sports. We would go up the street to this local college and sneak in, and play basketball in there, haha. I grew up in a really small town, so there’s not much to do. We had to find ways of making our own fun. [We’d] go on little adventures—hop on our bikes, go to abandoned hotels, and just try to make a good time. It was definitely fun. I grew up in a small town, but we made the best of it.”

AJ explains how his father, who played piano, inspired AJ to also play piano. “I started singing and playing the piano when I was four. When I was six I started writing. I loved writing definitely more than singing at the time. It was so much fun to create stories and write about what was going on in my life. I really enjoyed doing it, to the point where I was like, ‘I would love to write songs and give them to other people.’”

PopMalt: Do you remember what your first song you ever wrote was about? Kid stuff?

AJ: “Haha, yeah. I was six years old, and it was about two birds ‘falling out of a tree. One fell off and broke his knee.’ Haha!”

AJ goes on, “I didn’t even want to sing my own songs at the time. I wanted to give them to other people and have them sing my songs, haha. It’s fortunate that I can sing my own songs now.” Like I said up above. This dude’s got pipes.

PopMalt: I think one thing that stuck out to me is how effortless your runs are. I mean, they’re like butter.

PopMalt: They seem effortless! Obviously, they’re not, because I know that you’ve worked for years to get to this point. Did you have vocal lessons and a lot of formal instruction growing up?

PopMalt: Wow, well it shows in your abilities. It’s evident that you’re very refined. You haven’t been doing this overnight. This is years in the making.

AJ: “Yeah! It’s been an everyday thing. It’s just something I’ve always loved, you know? I just want to get better at it.”

That kind of teachable attitude will help give AJ the longevity he needs for a career in the music industry. He’s also making great connections at the label and explains what it was like when he first got signed.

“That was such a cool moment—[after] doing all the runs, meeting up with different labels, and being able to choose Epic Records…It just felt right. It felt like a family. It wasn’t that hard of a decision…It just felt normal. I kind of already knew the people that wanted to sign me, so it was kind of cool. It was almost as if we were friends. That’s why the decision was so easy to make.”

Once AJ got signed, he and his family relocated to Los Angeles. The 17-year-old remembered sharing the moment with his family, “We were all just like, ‘Wow. This is actually happening. This is crazy.’ We never thought in the whole world that this could actually happen. You know, ‘cause I’m from a small town. I never even thought that coming to LA was ever an option. Then, I made it out there—then Epic called.

We’re sure that was a surreal moment—especially when AJ first received radio play.

PopMalt: What was it like hearing yourself on the radio for the first time?

AJ: “Haha, the coolest day of my whole life. I remember when I was a little kid and I used to hear these different songs on the radio. That was at the point in my life when I was [first] writing songs, and I used to think to myself, “Man, it would be so cool if I could hear myself or someone else singing one of my songs on the radio.” That’s always been a dream of mine. So, being able to hear, not only a song I wrote but a song that I’m singing on—hearing myself on the radio is the most unreal thing in the whole world.”

AJ’s family was just as happy as he was. He tells about how his parents encouraged him in his musical pursuits. “Yeah, they were very supportive…They just let me kind of do what I wanted to do. Like, they never pushed anything. If I wanted to do something, they were always supportive of it.”

If there’s one thing we’re supportive of, it’s the hope that AJ could have some great collaborations one day.

PopMalt: It’s obvious that you have this R&B/Soul background. Who are some of your influences musically?

AJ: “Yeah, so growing up I listened to a wide variety of music. My parents were always playing older music like The Beatles, Stevie Wonder, Michael Jackson, KISS, etc. You know, all the old bands. I also loved listening to Coldplay, to Lil Wayne, Bruno Mars—just a huge variety.”

PopMalt: I love that, man. Do you have any dream collaborations?

Mitchell might have his own ‘Uptown Funk’ soon. With over 30 million Spotify streams of his single “Used to Be,” this only gives the young artist more traction. His latest single “All My Friends” is gaining momentum and soon there will be more new singles to come just in time for his tour. Then, in Spring/Summer 2019, AJ’s first full-length LP will be here.

We look forward to seeing what AJ will write next! Best wishes to the Future of Pop.


[Updated 5/8/19] And by the way, AJ Mitchell sounds amazing in person! Cinco de Mayo 2019, AJ kicked off his ‘Hopeful’ tour at Globe Hall in Denver, CO. The storyteller serenaded the audience with songs about love, pain, and having fun. At one point, he hopped onto the keys and played a stripped-down version of his tune ‘Mind.’ Fans praised him as he belted out high tenor notes with ease. If you’re looking for an artist that can not only match the record, but exceed it, you’ve come to the right place. The talent was matched with the warm spirit he carried, showing fans how much they meant to him. Anyone who was at the concert would agree: That night we witnessed a star being born. Check out our backstage interview with him below.

Staff edit: This article was updated on 5/8/2019 to include backstage interview footage and commentary from AJ Mitchell’s ‘Hopeful’ tour.