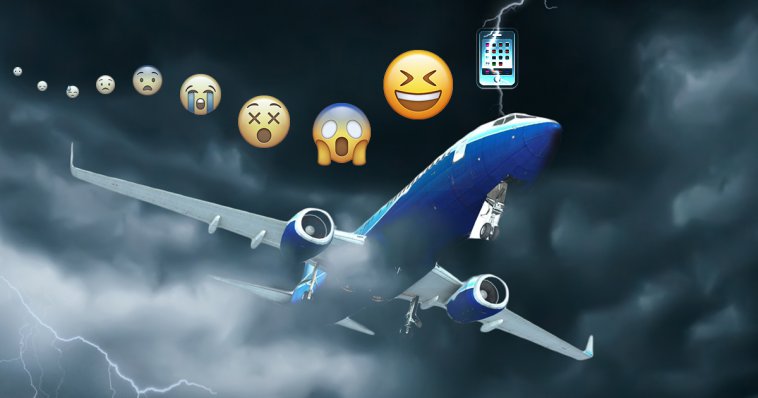 BOSTON, MA — Passengers on Oceanic flight 151 out of Boston, MA are lucky to be alive after an 11-year old refused to set his phone to airplane mode during takeoff. The London-bound flight experienced what veteran pilot Jack Sullenberger described as “extreme turbulence” while gaining altitude. Despite the fact that the flight attendants had, in fact, instructed passengers to “put all cell phones in airplane mode at this time”, this 11-year old gamer did not comply.

“I’m lucky to be alive,” a passenger stated after being examined by medical crews on the ground. “Everybody was screaming and shouting, asking if anybody may have possibly forgotten to enable airplane mode. When we realized this kid had done it on purpose, we couldn’t even… we couldn’t even.”

The child, who cannot be named due to his age, was reportedly finishing a level of the popular game “Angry Birds” when Rebecca Phillips, one of the in-flight stewardesses, noticed suspicious light coming from his device. “I asked him to switch his phone into airplane mode and I remember distinctively what his response was— ‘No.’ We were all screaming at him ‘We’re all gonna die, we’re all gonna die! For the love of all that is holy, turn off your [expletive] phone’, but all he said in response was ‘Just let me finish this level real quick.'”

It’s no secret that even the most seemingly harmless devices can wreak havoc during takeoff, which is why every airline follows a very strict set of rules and regulations regarding carry-on items. We spoke to a TSA agent, who requested anonymity due to the ongoing safety concerns of airline travel. “We see all kinds of crazy things hiding in people’s luggage”, the agent admitted. “While we always confiscate the most dangerous items such as fingernail clippers and half-filled expensive hiking water bottles, it’s sometimes hard to suspect whether or not somebody is the type of person to ignore requests to put their electronic devices in airplane mode during takeoff. Unfortunately, there’s no watch list for people like this yet.” When questioned about how such incidents can be prevented in the future, the agent responded with a surprising lack of optimism. “Honestly, that’s the scariest part of being in this business. Anybody with a blatant disrespect for authority and a really fun mobile app, or even somebody just wanting to live Tweet the takeoff could cause a life or death situation at any given time.”

Oceanic flight 151’s pilot, Jack Sullenberger, heroicly navigated this doomed plane and managed to successfully crash land in a strip of connected parking lots near Boston’s TD Garden arena, more commonly referred to as the place where the Boston Celtics play. “It’s nothing short of a miracle that so many of those parking lots were completely empty tonight, especially during a concert”, Sullenberger said in an official statement to the press. “If any band other than Nickleback had been performing at the time, we’d have had real trouble.”

A movie based on this incredible true story is already in the works. Harrison Ford is slated to play the pilot, Jack Sullenberger, with supporting roles by other popular actors and actresses that everybody keeps seeing in these types of movies. Unfortunately, after no parents felt their kids would be perfect for the role of the spoiled little brat, the script is being tweaked to be simply a “based on true events” piece with Bryan Cranston starring as a stressed Wall Street commodities trader who merely wanted to check an email during takeoff.